Imagine a recipe where it takes you back to your fondest childhood memories, where you sit among your friends and family enjoying oversized portions of food and share how thankful you are for one another. Imagine that recipe and being able to share that fondest memory with people who are eager to hear. The recipe is beyond the taste, texture, or even nutritional value. It reminds me of the morning of Thanksgiving and Christmas. Although, Christmas was slightly different due to the overexcitement of presents, toys, and stockings that hung over the mantle. Christmas still had my mother’s macaroni and cheese, yet it was preciously warming in the oven preparing for its day. However, Thanksgiving has a different meaning to my memories. Thanksgiving did not drown out the cooking of food with its allure of gifts and sweets. Thanksgiving was all about the food, it is not Thanksgiving without the food. It was more than dinner. It was more than the ham or the deep-fried turkey (our family’s specialty). It was my mother’s mac and cheese which every Thanksgiving morning sat unprepared on the table waiting to be mixed together in my mom’s vast cauldron. Thanksgiving was the macaroni and cheese’s day. It was its moment to shine. I remember the mornings my mother woke up earlier than the birds to prepare her part for Thanksgiving. I watched her dump ingredients into her pots and pans without a second thought. Effortlessly, she combined the ingredients of macaroni noodles, cheese, milk, and her heavy-handed seasonings. She stirred it carefully making sure not to break or bruise the soft noodles. Her hand twisting her spoon masterfully against her pot careful not to touch the hot edge of it. When she was finished with her skillful tossing, she tasted it. Her head nodding against the taste. She dumped it into her pan coating it with handfuls of cheddar cheese like snow piles against a mountain of noodles. She smoothed it laying it flat against its bed of tin, careful not to smash it. Her wooden spoon gliding over the bright glow of the sharp cheddar cheese. When she places it in the oven, she looks over at her table of ingredients, sighing to herself.

“I forgot the butter.” 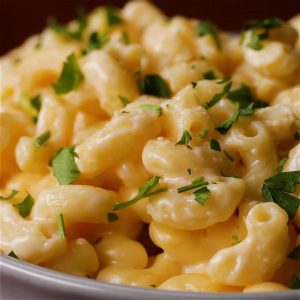 In the 14th century, a cheese and pasta casserole was said to have been made in an Italian cookbook called Liber de Coquina. This recipe was the start of the famous dish macaroni and cheese.  The original recipe of macaroni and cheese included hand-cut pasta, parmesan cheese, and butter. The recipe then evolved into a more modernized version by a woman named Elizabeth Raffald, an English innovator in 1770, she included the recipe in her cookbook titled, The Experienced English Housekeeper, Raffald’s innovated recipe included a type of roux sauce mixed with cheddar cheese commonly known during that time to the French as a Mornay sauce. She, then, adds parmesan and baked it until golden. After Raffald’s personal recipe, it later became a popular dish in the United Kingdom. The dish’s migration to the United States started with Thomas Jefferson and James Hemings, who was a slave who cooked for Jefferson. Jefferson and Hemings found out about the recipe in Paris and brought it back to the United States. After the introduction to the U.S, the recipe was later named, macaroni and cheese. Its first appearance under its new name was in 1824 by Mary Randolph in her cookbook titled, The Virginia Housewife, Randolph’s recipe was similar to the others before; macaroni, cheese, and butter mixed together like a casserole and baked until golden.  Macaroni and cheese later became a staple food for many people globally because of its convenience. Macaroni and cheese can be bought, boxed, frozen, or homemade. It was mass-produced by Kraft’s in 1937 because of its availability in times of economic hardships. During the Depression and World War II, macaroni and cheese were eaten quite regularly between soldiers and citizens. The recipe was no longer reserved for just cheese, butter, macaroni, and baking. It became a specialized recipe with the ability to adapt to all new varieties of ingredients and cultures.

Many cultures have turned the cheese casserole into a traditional dish. The traditional side dish could be considered soul food with the right seasoning and spices. Soul food is a type of cuisine that is ethnically known to be prominent in African American cultures. In the 17th and 18th centuries, the newly formed United States had slaves from West Africa who practiced the making of this new dish. It later became a traditional food for African Americans living in the United States. The term soul food was coined in the 60s and 70s due to the civil rights and black power movements. Soul food can be traced back to slavery. It was the foods like fried chicken, collard greens, hushpuppies, chitterlings, cornbread, and macaroni and cheese that was made with little ingredients and a lot of heart. Soul food came from slavery and mistreatment, yet it also brought people together who enjoyed each other’s company and endured the neglect of white slave masters together which unified African people of different places. The introduction of soul food created its own recipes using a blending of cultures around African and Europe. Marconi and cheese in the modern age could be considered soul food to some because of its ever-changing recipe that had been practiced through generations.

With the little adaptions from recipe to recipe we see how much has changed between the original recipe to the present. Macaroni and cheese is no longer a simple recipe that includes just noodles, butter, and parmesan cheese. It has become a challenge to provide your own type of macaroni and cheese with an individual twist. These individual twists create food that is revolutionary in its own way. There are a million different types of macaroni and cheese that include, bacon, broccoli, lobster, hot Cheetos, shrimp, cauliflower, butternut squash, truffles, pumpkin, vegan cheese, chili, spinach and artichoke, and many more. It is a recipe where you could add anything and still have it taste good. In the book, L.A Son, by Roy Choi, we follow the author who redefines food and cooking for himself.  Choi was a Korean immigrant who grew up tempted by the allure of gambling and addiction. He later found a passion for cooking and become an inspirational figure for innovating common cultural foods. His innovation provided a new twist on beloved foods from all different cultures and traditions including his own. Choi found ways to urbanize Korean foods and fit them into everyone’s palate. “I had to write this book. To tell the story of my journey from immigrant to latchkey kid to lowrider to misfit to gambler to a chef answering his calling. To tell a story of Los Angeles and the people who live here. And to preserve it all on wax.”(Choi, 1). Choi takes us through neighborhoods and streets most people never see when they visit L.A. Choi’s experiences differ because of his passion for cooking interesting food for the residences of Los Angeles. Choi’s interesting twist on many foods like his kimchi and pork belly stuffed pupusas or his Pho for Dem Hoes reminds me of my mom’s signature macaroni and cheese. Choi’s spin on the pupusas was inspired by a close friend of his who was from El Salvador and worked with him. 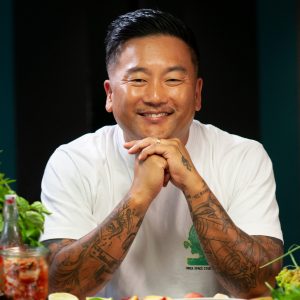 “I had known about the pupusas game before, but she taught me a few things, and I’ve never looked back.” (Choi, 305)

When I asked for her recipe and who originated it, she told me of her combination of ideas from her mother, my father’s mother, and the back of an elbow noodle package. She told me how she picked her favorite ingredients from each recipe and created her own. She used her mother’s incorporation of a tablespoon of flour, my father’s mother’s incorporation of chicken broth, and the incorporation of her seasonings. My mother constantly improved her recipe each year by adding less of somethings or adding more.  It became her specialty. Her ever-improving specialty. Looking throughout the history of the macaroni and cheese recipe from, Italy to the United Kingdom to Paris and then later to the United States we see how much has changed. The recipe became boxed, microwaved, mass-produced, and even a cultural staple. There is no perfect way to make the recipe. There is no perfect way to combine them. There is not a standard order that must be followed to ensure the validity of macaroni and cheese. It could take three simple ingredients butter, elbow noodles, and cheddar or parmesan cheese. Or it could be complex by adding, bacon or truffles.

There is no first memory of my mother’s mac and cheese the side dish grew up with me along with my sisters and cousins. The side dish was a family member we brought to Thanksgiving and Christmas making sure to keep her warm and cozy in the oven. We never forgot about her even in the chaotic morning after the macaroni and cheese were finished and it was my mother’s turn to round up the children to get them dressed. We never forgot about the side dish even when we were running late to dinner on Thanksgiving every year because of my father’s inability to leave the house on time. Some years when life got too hectic my mother would forget some of the ingredients, yet no one would notice and still eat piles and piles of the cheesy goodness. The recipe survived through many improvements and altercations. It survived from generation to generation which emphasized my culture and the meaning of soul food. I remember the years my grandfather would ask my mother for a personal pan, so he could have it all to himself without sharing with his sons or daughter. I remember my aunt driving four hours just to get a taste of my mom’s recipe. My family all around the United States called my mom just for her side dish. I wish this was just an exaggeration, yet the phone calls she had with my aunts and uncles, nieces and nephew sharing her recipe was real. Her recipe included parts of her mother’s recipe and my father’s mother recipe. My mother revolutionized macaroni and cheese for my family making sure to include generational traditions. It reminds me of Roy Choi and how he constantly tries to alter and improve traditional foods. He revolutionizes recipes that have been stuck in a certain way. Roy Choi and my mother have something in common, their ability to make ordinary recipes into a seemingly perfect one that still appreciates the original.

1 to 3 cups of sharp cheddar cheese

First, boil water and add salt. Once the water is boiling fully, add noodles and cook for 7 to 8 minutes. Preheat oven to 350 degrees Fahrenheit. 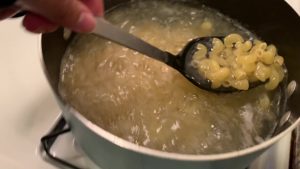 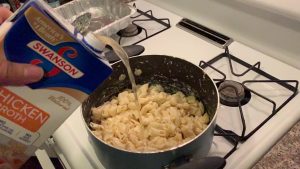 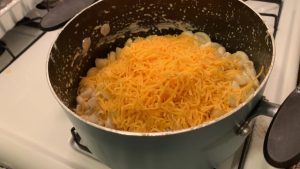 After mixed, add to deep baking pan and put it in the oven for 15 to 20 minutes. Do not forget to stir gently occasionally and ensure no burning on the bottom. Adjust heat accordingly.

Add more sharp cheddar cheese to the top of macaroni cheese and make for 10 to 15 minutes until it is golden brown or bubbly.

Let rest for about 10 to 15 minutes, to stiffen. Serve and enjoy!

“I’ll always order macaroni and cheese, but I don’t want it to be fancy.” – Drew Barrymore