As I sat at the table surrounded by family members, I stared at the bowl full of hot stew in front of me. I looked around and could see adult family members enjoying this soup that was new and strange for me. As a kid, I was convinced it was one of those foods that only adults enjoy. My mom encouraged me to try it and with a deep breath, I grabbed my spoon and filled tiny drops of this broth. It wasn’t enough to get the full taste so I took another sip, this time filling the spoon. Instantly and unexpectedly, this dish named pozole had just become my favorite. 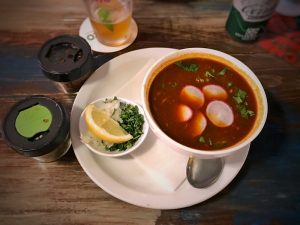 A bowl of prepared red pozole.

The fact that it was a popular dish in our Mexican culture had me confused as to why it took seven years for my mother to introduce this dish to me. I even felt a little resentment that I was not told about it a lot sooner. From then on, I had pozole as many times I could with the belief that I would be making up for all the times I missed out on it. My mom then started making it on my birthdays and soon, it became a necessary tradition for me to celebrate each year. My most memorable birthday with pozole was when I turned 15. It was a rainy day in February during my freshman year in high school as I walked home from school cold and soaking wet. I tried my best not to allow the weather to literally “rain on my parade”. As I opened the front door to my house, my cousin stood in front of me holding pink and purple balloons as I heard my mom and friends yell, “Happy birthday!” The smell of pozole instantly filled my nose and convinced me my birthday was in fact, not ruined at all.

From then on, whenever the topic of pozole was brought up between me and my friends, I would argue that my mother’s pozole was the best and that no one could top hers. Of course, my friends felt the same about their mother’s pozole and would argue the same. To settle this debate once and for all, I would invite my friends over for pozole whenever my mom made it. My friends would always ask, “What’s the special occasion?” since pozole is usually known to be served during celebrations but at this point, my mom was making it “just because”.

Once, I attended a friend’s birthday party where pozole was served. People around me saw that I was hesitant to try it as I only trusted my mom’s pozole. They tried convincing me it was delicious. To my disappointment, it wasn’t as great as my mother’s but I held back from arguing to avoid being rude and so I politely agreed. Ever since I have not tried other people’s pozole except for my mother’s. There was an exception though when my boss had someone make all the employees pozole as a gesture of gratitude during the week of Christmas. As much as I hate to admit, that pozole was better than my mother’s that I did not bother telling anyone that this pozole was better. This pozole was different though: it was green as opposed to my mother’s whose dish was red because of the sauce she used. I was amazed that there were other kinds of pozole! This green version of my favorite dish instantly took me back to 1st grade when I had just finished reading Dr. Seuss’ “Green Eggs and Ham.” I had begged and convinced my mom to make me green eggs and ham at the time. Unfortunately, she can’t make me green pozole since she doesn’t know how to cook it. 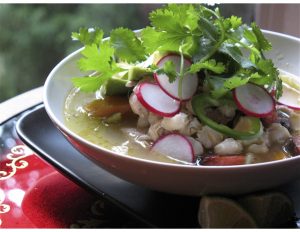 Although pozole is a popular Mexican dish served on special occasions, people still enjoy it on any typical day. If you’re lucky enough, you may even have a Mexican restaurant nearby that serves pozole freshly made on weekends. Usually Sundays after church many Mexican families go out to eat it. Sundays also became the time of the week that my aunts, uncles, and cousins would go over my Abuelita’s house to enjoy a bowl. I would wake up to the smell of pozole as it filled the house with its scrumptious scent. The smell was the best thing to wake up to.

The table was covered and full of napkins, soda, bowls, cups, tostadas, condiments, and of course, loved ones. It always seemed that we did not have enough chairs for everyone because of how crowded it was with family members. So, when one person was done eating, he or she would offer their seat to someone who was standing. Usually, the kids would sit at the same table in order to allow the adults to sit together and chat away. Even little cousins who were picky eaters liked pozole and would always ask for seconds. Our neighbors from different races and ethnicities would enjoy it as well. Every time pozole was made, we would invite them over or send some their way. 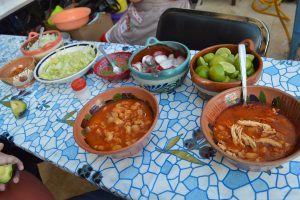 Table with pozole and garnishes.

As I got older, I realized soon my mom would not be able to cook pozole when she got as old as my grandmother who couldn’t cook pozole at her current age. I never learned to cook, not even my favorite dish. I was worried that my family’s recipe would be gone if I didn’t learn. So, at Christmas of 2019, I learned how to make my very first dish. It was easier than I thought but my mother made it difficult with her style of teaching. You see, most Mexican mothers do not use measurements when cooking. When explaining how to make something, they will always say to just “tanteale” which means to put however much of an ingredient you think is needed to cook the dish well. My mother explained to me that “you just feel it”. Since I never cooked in my 27 years of life, it was hard to sense when enough was enough but I managed to pull through. I was proud of myself for making a decent pozole that tasted very similar to my mom’s. I also felt relief knowing that I got the recipe down to pass down to our family’s future generations.

The History of Pozole (Warning: Not for the Weak Hearted)

The only thing I knew about pozole was its delicious taste, but I learned that there is more to it than just that. The term pozole comes from Nahuatl words such as pozole, pozolli or pasole. These words mean foam and it refers to the foam that is made when cooking pozole. In pre-colonial times, Aztecs were one of the many indigenous people of Mesoamerica that cooked pozole. Just like today, the Aztecs cooked pozole to celebrate special occasions such as a celebration for their god, Xipe Totec, who is said to have fed his first people with his own flesh. Because of this, Aztecs included a very unique ingredient in their pozole: human meat! Prisoners and slaves were sacrificed to obtain their flesh. When Spanish conquistadores arrived, they did not allow the practice of their cannibalistic rituals, so the Aztecs started substituting their human meat for pork or Xoloitzcuintles meat, a famous Mexican dog (sounds a little bit better than human meat, right?). Ok, but let’s not let these historic details keep us from enjoying a bowl of my mom’s pozole. Below is her recipe, human-meat free (insert sigh of relief here).

Go to your nearest grocery store and get: 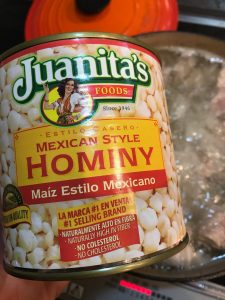 Recommend popular hominy that is commonly used in pozole.

First, you’ll need to make the chili sauce. My mom likes to make red pozole so this red sauce will help do just that. Devein the California chili pods. You can do this by using a knife to cut down the middle and scoop out the seeds using a spoon. Next, you’ll want to rinse the chili pods and soak them in hot water. Make sure to use enough water to cover all chili pods. Once they become soft, blend the chili pods in a blender with the garlic and 1 chopped onion.

Fill a pot with 1/3 of water and bring water to a boil. While you’re waiting for the water to boil, rinse all of the pork meat and hominy. Add chili sauce, meat, and hominy once the water is ready. Don’t forget to add salt, (“tanteale”) and put as much salt as you’d like to achieve your desired flavor. Leave the stove on High and cook for 2-3 hours. Cut radish, cabbage, onion, and lemons and add to your bowl of pozole. Top off pieces of tostada with pozole if desired. Enjoy the smell of pozole as it fills your home. 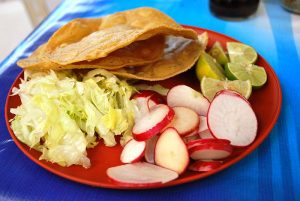 Prepare to join the debate of who’s pozole is better.

Berkman, J. (n.d.). What Is Pozole? How to Make Delicious Mexican Corn Soup. Retrieved from https://blog.prepscholar.com/pozole-recipes

Lopez-McHugh, N. (2012, May 21). Mexico On My Plate: Red Pozole and Its History. Retrieved from https://honestcooking.com/mexico-on-my-plate-red-pozole-and-its-history/

The sacred, religious, and cannibalistic origins of pozole. (2019, September 9). Retrieved from https://www.eluniversal.com.mx/english/sacred-religious-and-cannibalistic-origins-pozole

1 thought on “Celebrate with Pozole”