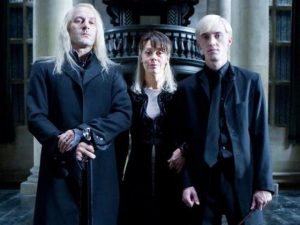 Throughout the Harry Potter series we are introduced to different wizard families that help or interfere with Harry’s quest to defeat Voldemort. One particular family that has captured many readers interest including myself is the Malfoy family. I think that the Malfoy family are interesting characters to focus on because unlike many families in the series they are the only family that switches sides in the end. In the novels, the Malfory’s are described to be wealthy pure-blood wizard family with a reputation of being pure-blood supremacist. However, as the novels progress from Harry Potter and the Sorcerer of stone to Harry Potter and the Deathly Hallow we start to see each family member mainly question what is right and wrong. Starting with Harry Potter and the Sorcerer of stone, we get an idea of who the Malfoys are through characters like Harry, Hadgrid and Arthur Weasley. Through Harry’s point of view when he first meets Draco in Madam Malkin’s, Draco is described to be snotty, unsympathetic and spoiled to a point where Harry is reminded of his cousin Dudley. Hadrig gives more information about the Malfoy by stating “ There’s not a single witch or wizard that went bad that wasn’t in Slytherin” (29:47). This bit of information gives the readers an indication that the Malfoys family are considered evil and sinister because of their families desire to be Slytherin as well as their ancestors being Slytherin’s too. As for Arthur Weasley, he views the Malfoys as a power hungry and a bit conceited, especially with Lucius Malfoy. Despite all of the flaws that the Malfoys have there is no denying that both Narcissa and Lucious love their son Draco and vise versa, it shows that Draco is a loved child by both of his parents. It isn’t until the last three installments of the novel that we start to see more of the Malfoys transition from bad to good. Starting with Lucious Malfoy, we first see him as one of the most loyalist members of Voldemort’s legion. Eventually, through a series of fauliers he is disgraced by Voldemort and other members of the death eaters. Reminding him that he is no longer is in a high position of authority as he once was before Voldemort’s return. Ironically, I find Lucious humiliation from Voldemort to be a reflection of how Lucious treated Arther over the years when he was in power. As for Narcissa, she begins her redemption arc due to her love for Draco and fear that he will die if he does not succeed with his task from Voldemort. She desperately pleads to Snape for him to watch over Draco and carry out his task to kill Dumbledore if Draco can not complete it. While in Harry Potter and the Deathly Hallows, Narcissa lied to Voldemort about Harry’s death after asking Harry if Draco was still alive. This act of defiance demonstrates that her love for her son is stronger than her loyalty to Voldemort, which ultimately saves Harry’s life. As for Draco, in the beginning of the Half-blood Prince he seems to be proud about the task he has been given to bring the death eaters to Hogwarts and murdering Dumbledore. However, as the novel progresses Draco begins to question himself about his ability to complete the task. Only being able to help the death eater enter Hogwarts, he hesitates in killing Dumbledore by stating “ I haven’t got any options. I have to do it. He’ll kill me. ( ch 27,10:21). By his hesitation Draco has shown that he is not evil but a victim of unfortunate circumstance due to having parents who are death eaters. Towards the end of the last novel the Malfoys family flee from the fight at Hogwarts. Their decision to leave the scene signifies that they are no longer following Voldemort’s lead. In conclusion, I think that J.K Rowlings created the Malfoy family as a way of showing that people can change from what they believed was right to understand their mistake.