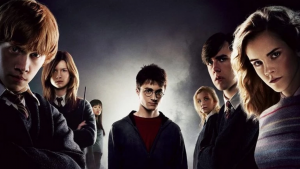 Sirius Black is another character who shows his love for Harry in the form of loyalty as well as sacrificing his own life to protect him. In the Prisoner of Azkaban, Sirius shows his love for harry by respecting his wishes not to kill Peter, even though killing peter was the reason for Sirius ability not to go insane during his time in Azkaban. While in the Order of the Phoenix,Sirius appears to Harry in different ways to make sure he is okay, despite the fact that if he were to be caught he would lose his freedom. The relationship between Sirius and Harry is interesting because of how they are able to see each other as an opportunity to start over a be a new family. Similar to Lily, Sirius took up a parental role in Harry’s life and felt the need to protect him from the death eaters, unfortunately this leads to his death while fighting alongside Harry.

Hermione Granger is also seen making a sacrifice to protect the people she loves. In the beginning of The Deadly Hollow part one, she erases her parents memory of her to protect them from any danger caused by death eaters. Hermione’s sacrifice is very impactful because of the role reverse on the child protecting the adults in contract of what we’ve seen throughout the series of the adults protecting the child from Voldemort and his followers.

In The beginning of the Deadly Hollow, Harry’s friends disguise themselves as Harry to transport him from the Dursleys house to Ron’s house. On their way there, they are all attack with the result of Hedwig’s death by protect Harry from death eaters, Madeye’s death as well as George being injured. This scene shows Harry how much he is loved by his friends who are willing to give their lives to help him even when he doesn’t want them to.

It takes Harry a long time to understand his mother’s words to him but eventually he realizes that he has friends and family around him. J.K Rowling’s demonstrates sacrifice and love as two themes that go together to protect the people they love. It is from her writing that children and adults are able to understand what unconditional love is for someone who is important to them.