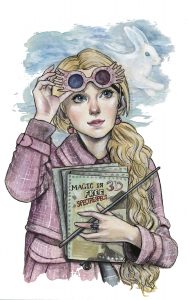 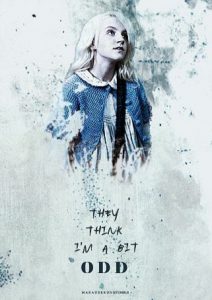 Luna Lovegood is a fictional character in the Wizarding Books written by J.K Rowling. Luna is sorted into Ravenclaw house and makes her first appearance in Harry Potter and the Order of the Phoenix. She is not your typical character for she is quite unique compared to the rest of the students at Hogwarts. Many in the wizarding world think that she is nothing but an odd girl. Many have given her a nickname “LoonyLovegood.” Which means someone who is strange or a weirdo. I think her character is astonishing and is a type of character that is over seen. Her character throughout the series shows that aside of her being a bit odd she is very knowledgeable and has been a huge help in Harry’s incredible journey to fight against the dark lord, Voldemort. Explains why she’s in Ravenclaw House. 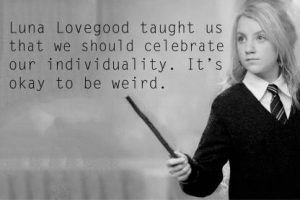 This Ravenclaw embodies the true meaning of mindfulness and intelligence,  she is a perfect example in teaching others about “Self-acceptance” Here is a quote from Harry Potter and the Order of the Phoenix: “Always be yourself because if your not yourself who are you? A: Someone else therefore not being you at all.” Luna never shows any distress against what others think of her and tends to live life in her own bubble with no interruptions. She is always open to new things and learn from them, she pays no attention to what others think of her. Luna much believes that the mind is better use for other things such as reading the Quibbler or getting lost in your own thoughts.

Luna is such a beloved character, that is because regardless in the worse circumstances she always chooses to look on the bright side of things, even in the darkest of moments (Quoting Dumbledore there). I have grown to noticed that Luna Lovegood is very quotable and says really unique and impactful phrases that make you stop and think. For example when she quotes her mother: “My mum always said, things we lose have a way of coming back to us in the end. If not always in the way we expect” another great quote in which compliments well with this is “Patience is a virtue” I believe what Luna’s mother tried to teach Luna that life has a way of working things out in the end as long as we remain patient.

Harry tends to gravitate on Luna’s words and embraces them with comfort. Here is another example where Harry thought he was going mad because he was able to see a creature that his friends couldn’t see. Luna comes in and tells Harry “You’re just as sane as I am.” Luna let Harry feel reassured that he was not “crazy” and confirmed the existences of the Thestral pulling the carriages to Hogwarts. Luna’s explanation as to why Harry is able to see the creatures was because they both have experienced or witnessed death first hand. Luna’s validation basically ease off the process of some of Harry’s trauma during his fourth and fifth years at Hogwarts. This scene itself is very impactful amongst not only Harry but to the audience as well, teaching us that no matter how different you may be to others but there is strength in sharing experiences, it could be joy, grief or rage based on your perspective towards the world. It does not confine you as any less sane than anyone else in the world.

Luna has great tendencies of saying the right words in the most difficult of circumstances. For instance, she shows Harry how to acknowledge pain (grief). In example from the books: “Yes, it was rather horrible, said Luna conversationally. I still feel sad about it sometimes. But I’ve still got Dad. And Anyway, it’s not as though I’ll never see Mum again, is it?… ” This here was a great moment and something that Harry needed to hear. Luna can say I still feel very sad about it sometimes without wanting to put Harry more down that what he has been feeling but to overpower the hurt. She gives Harry hope of a possible reunion with the dead, it basically lets Harry step into a reframed mindset that the dead are not gone forever, but only temporarily.  Luna successfully normalizes death to Harry and he is able to cope with the death of his loved ones a lot better. Luna chooses to see beauty in everything and knows that everything is temporarily, especially those things that hurt, life = death.

“Luna had decorated her bedroom ceiling with five beautifully painted faces: Harry, Ron, Hermione, Ginny, and Neville. They were not moving as the portraits at Hogwarts moved, but there was a certain magic about them all the same: Harry thought they breathed. What appeared to be fine golden chains wove around the pictures, linking them together, but after examining them for a minute or so, Harry realized that the chains were actually one word, repeated a thousand times in golden ink: friends…friends…friends…” 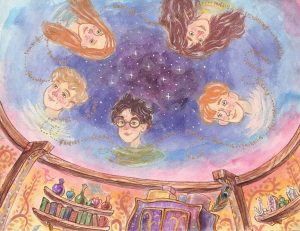 This scene made Harry a bit emotional when staring at Luna’s painting on her bedroom wall. The feelings he got from her art while gazing at it while holding his child in his arms, he cared to notice that the word Friends repeated throughout the painting and how this painting helped Luna understand that she has friends. Harry’s recognition toward Luna made him decided to name his daughter after her for many reasons as to how much she has helped him especially in his emotional crisis. In the end when Harry and Ginny baptize their daughter Lily Luna Potter, the remind Luna that to them she’s more than a friend, she is family.

In conclusion, my belief is that J. K Rowling created Luna to send out a message not only to Harry but to the world. A message of self acceptance without a critical eye and bringing a positive spirit anywhere Luna was at. Luna is a great character and fit well in Harry’s whimsical journey. 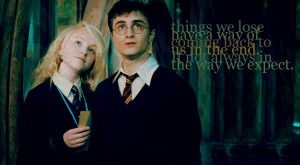