The film McFarland USA(2015) is based on a true story of a Teacher/Coach, Jim White (Kevin Costner) and a high school cross country team from a poor farm town in Central 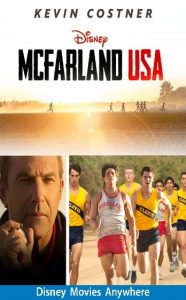 California. So, White relocates his family to a new town taking on a lowly post teaching science and P.E., a last resort job, in a poor agricultural community that’s largely made up of Mexican American farmers and produce pickers.

While Coach White arrives in McFarland as an over-qualified assistant football coach, a quick conflict with the head coach leads to the ending of that arrangement. It’s while coaching a P.E. class that White realizes that several of his students are incredible runners, due to their lives working the farm fields before and after school. In a school where a good majority of the students are sons and daughters of Mexican field workers, Coach White would have to have to get over any kind prejudices he might have had rather quickly, or he would not survive this potentially last stop in his coaching career.

During a football game White over rules the Coach’s request to put in an injured Johnny Santiago(Hector Duran), which gets removed as assistant football coach.  One day at P.E. class Jim sends the students to run laps.  Then Jim takes notices of three boys that are strong runners – Victor Puentes(Sergio Avelar), Johnny Santiago(Hector Duran), and Damacio Diaz(Michael Aguero). He notices that some of the boys run from school to the fields, where they work with their families to earn money as fruit and vegetable pickers. Although Jim has never coached cross-country running, he decides to give it a try.  He tells Santiago he’s in the wrong sport.  Santiago tells him that he got cut just like you.  Victor adds, “hey they’re treating you like a picker, Mr. White.”   Mr. White approached Principal Camillo (Valente Rodriguez) to ask if he could coach cross country.  The principal replies, “cross country is for private schools; they breath different air then we do”, eventually he agrees to let him hand pick his own team.

Jim sets out to recruit seven runners for the team.  His first recruit was Johnny.  He then has Johnny help him to recruit six more runners for the team, starting with Victor.  Jim handpicks Danny Diaz(Ramiro Rodriguez), the slowest runner, on the basis that Danny will bring his faster brothers, and for this Danny is labeled as the anchor of the team.  His last recruit was Thomas Valles(Carlos Pratts), but he did not want to run with the team.  When Thomas gets into a fight and Jim negotiates for him to join the team to avoid suspension.  Although the boys are initially reluctant, they agree to join the team and run with Jim across the town.

The Diaz brothers had to quit the team because practice has been taking up too much of their time and needed to help their father pick in the fields. Jim decides to volunteer to help them pick in the enormously hot sun so they will be able to make practice, and it is in that moment in the fields among them he realizes in just one day he is from a more privileged background learns the hardships these young men endure every day and already understand the meaning of hard work.  Coach White also learns of the hardships of another athlete on the team – Thomas Valles is so distraught over his home-life with a drunken father that he ultimately contemplates suicide. Finding Thomas sitting on the edge of a bridge, Coach White connects with the young man, talking him out of jumping, and helping him channel his frustration through running. As the coach makes these bonds with each member of his team, he encourages them to consider that there is more to life than just picking in the fields, pointing them in the direction of college. Mrs. Diaz is shown to be an exemplary mother who values her sons’ education and even teaches Jim White a lesson about the importance of family.  The other is when the people in town learn that Julie just turned 15 and decide to help organize a quinceañera for her. They bring Cheryl (Morgan Saylor), Julie(Morgan Saylor), and Jamie White (Elsie Fisher) to the salon while everyone sets up at home. Jim gets Julie a pretty dress, and she loves the party. Thomas gives her a bracelet that his grandmother made.  Later, Javi(Rigo Sanchez) and Lupe(Martha Higareda) offer to take Julie out for her own “parade”, with Thomas accompanying them. Not long after, their car is confronted by a group of punks that bother Javi. They attack the group, while they push Julie out of harm’s way. The authorities contact Jim, forcing him and Cheryl to drive to the scene and find Julie on the ground, unharmed but with scrapes on her legs and shaking tearfully.  Despite being assured that that the athletes protected Julie; Jim was still angry about what had happened to his daughter.

Eventually, Coach White tries to do his part to better understand the hard-working Latino culture, and adjusts his coaching demands to the lifestyles of the McFarland families. He helps his team members on and off the practice field. And he encourages the boys to reach for physical and educational goals they never thought they could attain.  In time, a sense of empathy begins to grow on both side of the cultural divide. Friendships deepen and a mutual respect begins to grow. The kids go from begin sarcastic to Mr. Blanco to respectfully addressing him as “Coach.” The community also begins to open its doors and its arms to the Whites and to the strange idea of supporting a “local sports team.” Eventually the coach’s wife, Cheryl, realizes that, “Nowhere I’ve ever lived has felt this much like home.”

In the opening and beginning scenes you view many stereotypes, from the family’s being shocked at the poverty-stricken community in which they now find themselves, in fact, his youngest daughter Jamie comments, “Are we in Mexico?” to encountering a restaurant in the mostly Latino community that only serves tacos and burritos, to Coach White and his family leave the restaurant becoming fearful  when they encounters a gangster looking group of Cholos driving lowriders.

In some ways, the film works to dispel some stereotypes about Latin families, community and the people in general.  Like when the family eats at the Mexican restaurant the first night in McFarland and Jim White observes a gathering of Latino car club members in their lowriders, he jumps to the conclusion that they must be thugs based on their cars and the way they’re dressed.  But, after White and his family get to know Javi (Victor’s brother) who is a leader of the car club, he later realizes Javi’s a humble and peaceful man, trying to live an honest life.  Javi also breaks down the machismo label of many Mexican/Latino men by the great affection he shows for his girlfriend, even painting her portrait on the hood of his car.  According to Fregoso (1993), “It is within cultural discourse that Chicano and Chicana culture workers experimented with alternative notions of culture identity. (p 28)” A subsequent stereotype is all the Diaz family works in the fields to make ends meet, their entire lives. Another is when Thomas’s father discourages him from furthering his education stating, “No one ever needed a book in the fields,” implying that he will never be anything more than a picker” explaining the reality for him means there isn’t a world beyond McFarland exist for him.

Ultimately, Valles and his teammates learn quite a bit from White throughout this film, but what truly is touching is that White learns even more from them. He has a true admiration for his team’s work ethic and an even greater appreciation for their sense of family. He sees first-hand the trials and tribulations these teens must rise above if they are going to be successful in life, but he also recognizes that all the success in the world means nothing if you’re not sharing it with the ones you love.

“They haven’t got what you’ve got. They don’t get up at dawn like you and go to work in the fields. They don’t go to school all day and then go back to those same fields. That’s what you do. And then you come out with me and you run eight to ten miles and you take on even more pain. These kids don’t do what you do. They can’t even imagine it. When I went out into the field with you Diaz kids, I’ll be honest: that was the worst day’s work I ever had to do in my life. And I said to myself, whatever kind of crappy job I wind up in, it will never be as tough as that. You kids do it every day. Your parents hope they can do it every day, and they’ll do it for a lifetime if it means a better life for you. You guys are superhuman. What you endured just to be here, to get a shot at this. The kind of privilege someone like me takes for granted. There’s nothing you can’t do with that kind of strength, with that kind of heart. You kids have the biggest hearts I’ve ever seen. Go run your race.”

This film is about more than running for the sake of a winning medal, it’s about racing toward and then enjoying the rewards of hard work and friendship, community, and intercultural acceptance and understanding.