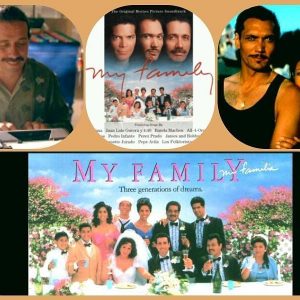 My Family/Mi Familia (1995) directed by Gregory Nava is a story about Jose Sanchez (Jacob Vargas) a Mexican from Centro Mexico who crossed the border and settles in East Los Angeles, with his uncle El Californio (Leon Singer).  He called himself El Californio because he was born and raised in Los Angeles when it was still Mexico.  Once he was settled, he begins working as a gardener and meets the love of his life Maria (Jennifer Lopez) an American citizen.  Maria was working as a nanny at one of the wealthy homes, just as the women are portrayed in most Latinx films.  Soon they got married and began a family of their own. 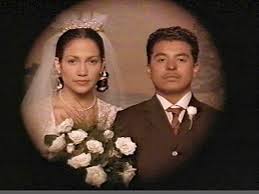 Everything changed for the Sanchez family when Maria was out grocery shopping and was picked up and deported by “La Migra” during a sweep.  Despite the fact that she was a citizen she was still picked up because she looked Mexican.  This scene is similar to the scene from Born in East L.A (1987) when Rudy a third generation is deported because of he looked Mexican.   “From the perspective of the white agent, Rudy looks or “appears” to be Mexican Fregoso, 57).”  He was stereotyped by his skin color just as Maria and were deported regardless of their immigration status.  “Despite his insistence that he was born in East L.A. the clarity of his enunciation in English, his Chicano-style dress and mannerism, Rudy is forcefully deported to Mexico along with Mexican workers employed in the toy factory (Fregoso, 57).”  Both characters were American citizens but did not have documents to proof their status at the time.  Maria was determined to get back to Los Angeles as she was born and raised just like Rudy in Born in East L.A (1987).  Both of these characters went through so much trauma experienced inequalities and discrimination.  Despite the challenges and after many attempts both of the characters in these two films returned home by crossing the border. 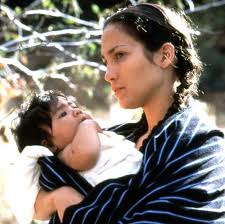 It took Maria to years to return back to her family in East Los Angeles with her two-year-old son Chucho (Esai Morales) who grew up and became a known Pachuco gang leader.  He started selling drugs and became very distant from his father.  His sister Toni (Constance Marie) became a nun and Irene (Lupe Ontiveros) got married.  His brother Memo (Enrique Castillo) went off to UCLA and became a lawyer, Paco (Edward James Olmos) became a writer, and Jimmy (Jimmy Smits) grew up and became a machista, very angry and violent as he witnessed Chucho’s death by the police.  Chucho and Jimmy grew up to and became the black sheep of the family.  These characters are related to Santana character in American Me (1992) just like Chucho.  Chucho and Jimmy character became troubled teens and end up in prison like Santana.

As a final point, this film depicts the struggles that Latinos challenged as they are stereotyped by the color of their skin, their appearance or just because they look Mexican.  Just as in other films the Latinx community in Maria and Jose character were portrayed  to mow lawns, become nanny’s or house keepers.  However, despite the struggles, Maria and Jose where supportive of the trials they faced.  Paco became a writer, Memo went to law school and became a lawyer, Toni was doing missionary work to help underprivileged immigrants.  They were complacent of the outcome as their adult children managed to live an enriching life.