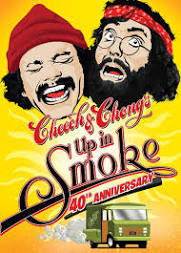 High Praise for Up in Smoke

The images being displayed on the big screens in American theaters of the 1970’s were of a new era depicting a more diverse and inclusive genre.  After years of progress was made by minority film makers the industry itself was forced to accept and acknowledve Latino protagonists, played by Latino actors and more so being themselves of Latino culture.  One such film that came from this decade was the pop culture phenomenon Up in Smoke (1978), which was written by and starred the comedic dual Tommy Chung and Cheech Marin also known as Cheech and Chong.  This film was as an unprecedented immersion into the genre of Chicano culture from a comedic lens and drug culture that was acceptable by a large group of the population.  But on the social politic stage this film also had far larger implications that could not have been predicted at the time of its release.

The film begins by first presenting the two main characters from very opposite sides of the social economic spectrum.  The opening scene shows Pedro de Pacas (Cheech Marin’s character) waking up on the couch of what you can assume is one of many relatives’ homes.  This is further demonstrated because the scene shows four children, one of which is climbing on Pedro as he sleeps, eating cereal while watching cartoons on a small television in a cramped living room.  Later as Pedro begins to walk out to his car, there is a man in the front yard of this home cutting a teenager’s hair while another sits on the porch watching them.  In complete contrast Anthony “Man” Stoner (Tommy Chung’s character) is displayed behind a bar in an upscale home as his father berates him for his lack of ambition and wardrobe.  One of the most interesting glimpses into the mood of the time towards Latinos was in this scene.  As Mr. Stoner attempts to encourage Anthony to gain employment as a strawberry picker with the United Fruit Company, so that “you gain muscles like the Mexicans”, he demonstrates the types of labor Latinos had become synonymous for having.  As the film progresses we get to see how the dual Pedro and Anthony meet for the first time on what appears to be a stretch of coastal highway and once they pair up it becomes obvious they are both part of the hippie subculture, or as they would later become synonymous for “stoners.”

The plot of the film is itself one of comedic exaggeration of this hippie subculture and Latino culture.  Pedro and Anthony share the same routine goals of getting high and go to lengths to do so as well as follow their other passion of making music.  The getting high aspect does not portray a Reefer Madness type of message in which people getting high are losing their minds and hurting themselves.  Instead these two getting high is just about laughs and fun even when they encounter the police which leads to their arrest.  Throughout the rest of the film they are presented as the fun dual who only seek simple means of enjoyment that others just don’t understand.  Additionally, it portrays the police they encounter as incompetent and blundering fools.  For example, in the scene in which the police raid Strawberry’s house and find drugs, Sergeant Stedenko – who is leading the investigation – mistakes Ajax cleaning powder for drugs.  As another officer points out that it has turned blue, he is convinced that it means “it’s high grade stuff. Could be Peruvian flake?”  Not realizing that it is merely Ajax turning blue as it does when it comes in contact with water.

On the social scale the film allows the presentation of two cultures that were not seen on the big screen before. The first being the obvious, the drug culture and people just having fun doing so.  The other the Chicano culture which existed for Pedro as living between both American and Mexican cultures.  Pedro appears to know enough Spanish to get by in his venture through Tijuana, but he clearly is not fully bilingual.  Anthony’s parents are presented as Anglo-American which leaves some mystery into his ethnicity as he is a lighter tone of brown.  When they are voluntarily deported it becomes apparent his was viewed by the immigration officers as a Mexican, probably guilty by association.

As a comedy piece this film has the ability to softly bring to light issues with immigration policy and processes of the time.  As Pedro’s cousin is set to be married in Tijuana, Mexico, the family calls La Migra – immigration officers – on themselves to bus the entire wedding party across the border for free and even “get a free lunch.”  The injustice of U.S. immigration policy is something that Cheech Marin would later attack in far more serious tone with his 1987 film Born in East L.A. (Fregoso 50).  Other aspects the comedy genre allow to be presented is the complexity of dual cultures and what it means that transverse between the two.  Americans that do not cross or encounter the southern border frequently often don’t understand how citizens in the two countries often cross the U.S. Mexican border for business, medical, or personal reasons frequently and the ease in which this was done.  As a comedy about drug culture Pedro and Anthony decided to make their return from Tijuana economically cost effective by connecting with an uncle whom of course would have connection with drug dealers in Tijuana looking to export marijuana to the U.S. The exaggeration of this shipment was that the entire van in which they were transporting this marijuana was made of marijuana.

Cheech Marin and Tommy Chung were having fun when they were making this film and already established a comedy following before this venture.  This was just the next step to expand on the Cheech and Chong brand.  In an interview Moments That Changed The Movies: Up in Smoke Tommy admits that at one point their intention was to title the film Cheech and Chong’s greatest hits.  They were not aware the revolutionary implications their style of filming would have on the comedic film genre that followed.  But even as a comedy it was clear they understood the presentation of minorities on the larger screen.  While the film glances on the Lowrider Chicano culture as Pedro is a part of it does not present him as the dangerous malicious character unlike other previous films had depicted Latinos as.  Either by coincidence or purposely but in the following year Up in Smoke was released in 1979 a group of students in Los Angeles organized to bring attention to the negative portrayal Chicanos and Chicanas were getting on film  (Fregoso 23).

The film Up in Smoke was an unexpected mainstream success because of its comedic tone but it also allowed a glimpse at what it was like being a Chicano in Los Angeles and not living a gang life.  Pedro was an artistic goofy character, while Tommy was simply enjoying the high.  While it cannot be denied that the film also presents Latino male stereotypes towards women and an uncontrollable need to pursue the desire of the white Anglo-American woman the film in my opinion did more good that bad.  It was a film that defined a generation, introduced new cultural norms, and made it okay to laugh about them.

7 thoughts on “Up in Smoke”