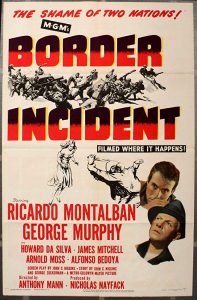 The genre of Westerns are universally synonymous with American identity and have been responsible for conveying racial and cultural misrepresentations of non-Anglo Americans since film began production in the United States.  Film director Anthony Mann has a plethora of films for which he has directorial credits and cover a variety of time periods including 11th century Spain, post American Civil War, and post WWII eras.  In the film Border Incident (1949), Mann mixes Western film style with the popular for his era noir film types – noir continues to be debated if noir is a genre or subgenre of film – to create what can be recognized a noir classic.  Noir films have specific characteristics in plot and cinematography.  They are filmed in low lighted settings and with dark and shadowing figures to convey and dreary darker place.  The plots involve “cynical” characters and include some type of thriller, crime drama, or mystery.

In Border Incident director Anthony Mann and writer Dore Schary mix noir and Western film styles to create a unique film that addressed contemporary social anxiety of that era.  Unfortunately, the film did not receive much recognition during that time and did not earn well in the box office.  Perhaps that was due to the political  backdrop of immigration and the debated Bracero Program (1942 through 1964) of that era.  Using noir Manning illustrates a darker side of unauthorized immigration and demonstrates how the program, although created to benefit both the Unites States and México, quickly became a target for organized crime on both sides of the México-U.S. border.  The introduction of the film shows like news reel footage and validates how the Bracero Program benefits both countries and goes as far to recognize that, “most of the [braceros] are waiting on the Méxican side to be okeyed, to receive the coveted American work permits or crossing cards.  Most of the braceros obey the laws of both countries.” (Border Incident).  As a social construct the film exhibits the necessity for labor in an “important industry for the entire country”, but due to the instability of agricultural needs the laborers had to be expendable and therefore would be supplied by México.  (This is a topic that we revisit throughout the plot of the film.)  Without mentioning, the narrative of the film implies that this type of labor is not something Anglo Americans should be expected to perform.  In fact, throughout the film it is the Anglo Americans who have the wit to organize the criminal aspect of this immigration into the United States.  On both sides of the border the organized human trafficking is controlled by Anglo Americans and it is Anglo Americans who are the most ruthless and deplorable that need to be stopped.  The narrative also suggest that is only through the organization of Anglo American that this criminal organization could succeed.  Leaving the majority of Latino actors to portray the greaser/bandido roles.  This falls in line with the suggestion of the Latino actors only being able to fit the “greaser” and “bandido characters in mainstream film during this era. (Fregoso 29) But the movie does not depict Mexicans in bad light.

The plot of Incident Border begins with demonstrating the problem of unauthorized border crossing which leaves migrants at the mercy of the geographical terrain as well as those that seek to rob and murder the immigrants.  This scene is filmed using the same geographical point throughout the film to demonstrate that this organized group controls this area of passage and without their involvement, those who attempt to cross by themselves will be robbed and killed.  The two, Méxican and American governments, recognize this a problem that needs to be addressed as it is a “problem of human suffering and injustice.”  The opening narrator goes on to explain that the case is of factual events “supplied by the Immigration and Naturalization Service.”  Then it transitions to officials from both governments meeting to cooperatively address the problem, two from each country.  From México there is Colonel Rafael Alvarado (Martin Garralaga) and Méxican Federal Agent Pablo Rodriguez (Ricardo Montalban), and from the United States there is Assistant Commissioner of Immigration John McReynolds (Harry Antrim) and Inspector Jack Bearnes (George Murphy).  One specific line in this scene that indicates the political sentiment towards unauthorized immigrants during that time was from John McReynolds as he responds to the colonel pointing out that the bloody clothes represent people who lost their lives, he responds, “I know that sir, but if they cross illegally, what is our responsibility to them.”… “Those that come over legally we protect.”  The colonel responds that while the majority go through the proper process, it is the “not well educated” which allow themselves to “smuggled.” During this scene neither government official questions the process that leads to braceros choosing to cross without proper documentation.  As they finish explaining the details of the investigation, which is to infiltrate the human trafficking organization as a bracero, the scene displayed the U.S. and México cooperating to solve the injustice and looking passed the question of legal or illegal status.

The scenery changes to a Méxican government building where a large number of braceros patiently weight as a government official comes out to call handful of names.  It here where we meet a bracero named Juan Garcia (James Mitchell) that will accompany agent Rodriguez as he attempts to infiltrate the trafficking organization.  Garcia explains he has been waiting here for six weeks hoping to be called to receive documentation to be allowed to work in the United States.  But once the names are called once again he is left to wait.  Rodriguez sits with him, surrounded by many other braceros, in the town plaza looking for information on how to cross unauthorized.  Garcia shows him who to ask and decides he does not want to wait any longer and will cross unauthorized as well.  To the organizers, it becomes apparent that Rodriguez is not a bracero when they check his hands and quickly become suspicious of him but he claims to be running from the law so they allow him to continue.  Both Rodriguez and Garcia are smuggled across along with ten other unauthorized braceros.  The route is well monitored with lookouts for border patrols on the American side.  In route an older bracero passes away because “it was his time” and the coyotes (smugglers) simply discard the body in the open desert.  This represented the plight braceros risk when crossing with smugglers.  They may disappear and never be heard from again and their family may never truly know what happened to them.

Once they arrive at their destination we are introduced to Jeff Amboy (Charles McGraw) and the leader of the operation Owen Parkson (Howard Da Silva).  Parkson needs to obtain documents to move the braceros he has forward to other farms where they employ both legal and illegal laborers.  His intent is to cut them out of their agreed wages as well as rob them and kill them as they transport them back to México once their assignments end.  During he infiltration inspector Bearnes is shot an killed as he tried to escape after his identity is uncovered.  As agent Rodriguez attempts to rescue the remaining unauthorized workers he is captured and they all led to the same geographical point where the first braceros were robbed and killed.  Except that Amboy double crosses his boss Parkson and insist he wants Parkson to see “what [Parkson’s] dirty work looks like”.  They continue into the Canyon where there are armed coyotes waiting to kill the braceros and dispose of the bodies.  But since Parkson is leading the group he gets shot first and a Western style shootout ensues.  Rodriguez helps take out the armed coyotes but ultimately needs to be rescued from quicksand by Garcia.  And the American authorities arrive shortly after.

The film is quite ahead of its time in addressing a social contemporary issue.  While most Western films depict Latinos as the villains with merciless characters (DeSipio), this one depicted an Anglo American as the true villain and his henchman the one that would ultimately end his reign of power.  The film is lacking in explaining further what happens to the braceros after they repatronized and whether they would be allowed to seek the jobs they originally set out to seek.  There was wrong doing on both sides of the border but the catalyst was the need for cheap labor to boom and large American industry. (Auerbach).  This is something the film fails to address.  For the era of the time is was expected that the roles were mostly played by non-Méxican actors except for moving around in the background.  Given todays political debate on immigration I feel this is a movie worth watching to remind us how we arrived at this debate in the first place.