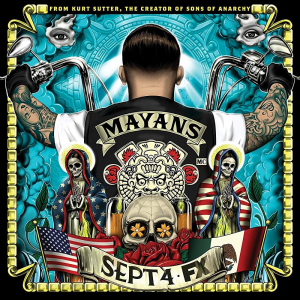 Mayans M.C. (2018) directed by Norberto Barba is a TV crime drama series on the FX network. In, Season 01, Episode 01, (Perro/Oc) we are introduced to Ezekiel ‘EZ’ Reyes (J.D. Pardo), a prospect trying to earn his membership into the outlaw motorcycle club, named after the series, Mayans M.C.

The series is sure to be complex because it is co-written by the creator of Sons of Anarchy (2008-2014), Kurt Sutter, who introduced viewers to the dramatic world of the 1%er outlaw biker culture; loosely based on the Hells Angels M.C., a primarily Anglo-Saxon biker club and co-writer, Elgin James, who is prominently embedded in the 1990’s punk subculture because of his straight edge approach against the use of drugs and alcohol in the punk world. Just like Sons of Anarchy, Mayans M.C. is modeled after a biker club; Mongols M.C., who originated in East Los Angeles and primarily a Chicano/Latino biker club in Southern California. The fictional story is focused on the border town of Santo Padre and deals with the interactions between the border drug runners Mayans M.C. and the Galindo drug cartel, a partnership sanctioned by its predecessor, Sons of Anarchy M.C. The complexity of the story is two-fold, one being the transition of EZ into the clubs’ brotherhood and the other being that his brother Angel Reyes (Clayton Cardenas), his sponsor into the club, is conspiring with a revolutionary group “Los Olvidados” (the forgotten), to take down the cartel who has caused family displacement in Mexico, by rederring children parentless. Beginning with the first episode, both of the problems presented are significant because it positions the Chicano/Latino image as detrimental to real-life Chicano/Latino males. 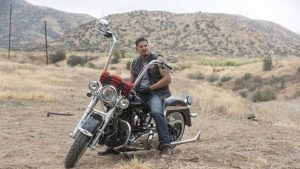 The episode begins with EZ riding along the US side of the US/Mexico border on his gangster style Harley Davidson Motorcycle. Spanish rock music plays in the background as he rides his roaring, loud motorcycle along the high barrier between the two countries. EZ is a young, handsome Latino man with brown skin, a muscle build, and he’s wearing biker jewelry, jeans and a black biker vest. EZ has all the signs of a biker bad boy, reminiscent of the character Bob introduced in Valdez’s film, La Bamba (1987) (Valdez, 1987). His look exhibits many of the stereotypical Chicano/Latino images that have been mentioned as negative and derogatory towards Chicanos/Latinos, in the works of Fregoso, Hernández, Nericcio, and the film The Bronze Screen: 100 Years of the Latino Image in American Film (2002) (Fregoso, 1993) (Hernández, 2016) (Nericcio, 1996) (De Los Santos, Dominguez, & Racho, 2002). The episode is filled with images that codify a Chicano/Latino culture; including the Mayan God insignia patch worn on the vests of the Mayans biker club, several Virgen De Guadalupe statues, and the stronghold of the biker brotherhood that comes across as a gang rather than a club. It becomes evident throughout the episode, that EZ is conflicted between his new world versus who he was in the past. 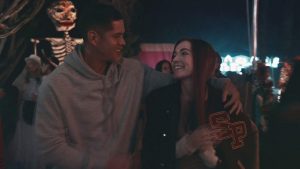 EZ is recently released from jail and has decided to depart from the good boy image of his high school years. Flashback scenes depict his high school and romantic life throughout the episode, before he was incarcerated. He is portrayed as a clean-cut teenager, athletic type, good boy teenager, with a high school sweetheart.

While in jail, he experiences a break up and once released he decided to join his brother, a bad boy, Angel, by prospecting the Mayans M.C. His life has now taken an opposite direction, one that involves delving into the unfamiliar, brotherhood formed in outlaw biker culture. The debut episode takes us directly to the border and that solidifies the concept, that this is a transnational themed story that will involve the need for a Chicano/Latino conflict. As expressed by Fregoso, “ For Chicanas and Chicanos (border residents, artists, and researchers) and also for Mexicans living on the borderlands, the concept has a longer history and a more politically charged meaning, referring to geopolitical configuration of power and to power relations within a cultural process” (Fregoso, p. 65).  The literal border appearance represents a power struggle that will ensue for EZ and the Mayan M.C., throughout the series. 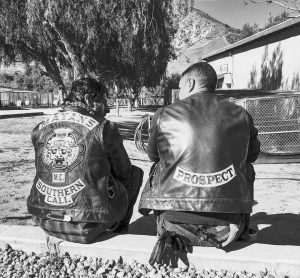 EZ will need to navigate the prospecting requirements of the club while simultaneously betraying the club brotherhood, and betraying his brother Angel because EZ turns out to be an FBI snitch.  The dramatic twists were employed to create additional conflict, along with the border presence because the fight for control of the border is currently a real issue for the US and Mexico. The current debate is both a political and drug control issue that is being played out in the media. The first episode takes us on tour through intricate, underground tunnels that are used by the fictional drug cartel and the motorcycle club to transport drugs and humans through the US/Mexico border. This gives a clear message that the border is in control of the Chicanos/Latinos that are moving back and forth between US/Mexico, but of course not freely, but by being a cunning, sneaky force that moves around in the dark tunnels. In this respect, the images of Chicanos/Latinos at the border in Mayans M.C. is not victorious and unfortunately delivers the message that the Chicano/Latino presence, remains contentious.