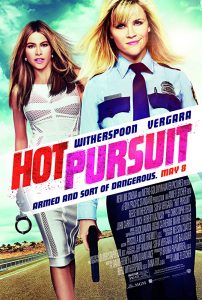 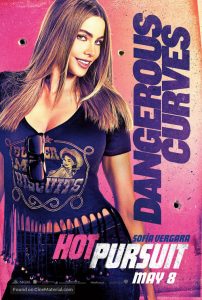 Being a fan of Reese Witherspoon and Sofia Vergara, I was excited to watch Hot Pursuit (2015) the female buddy film comedy directed by Anne Fletcher.  However, after about twenty minutes in, I lost interest in the film, but watched the entire 87 minutes of it, in order to complete this blog.

Witherspoon plays Cooper, an uptight officer who is assigned to accompany Deputy US Marshall Jackson to provide witness protection and escort Mr. Felipe and Mrs. Daniela Riva from San Antonio to Dallas, who both agreed to testify against Vicente Cortez, the dangerous drug cartel leader who was recently apprehended.  The simple operation got complicated and went awry when two other masked groups arrived at the same time and exchanged shots leaving Deputy Jackson and Mr. Rivera dead.

Vergara is Daniella Riva, the newly widow and Cooper’s responsibility to protect. Riva is depicted as the stereotypical trophy wife. A sexy, hot headed, loud Columbian with a very heavy accent portraying an example of the “dominant archetypes of Latinas in Hollywood-as the spitfire, the clown, and the dark lady” (Ramirez Berg, 2002).  Cooper and Riva escape in one of Riva’s cars and the antics begin…

The plot of the film is not new or original.  There are corrupt cops, hired gunmen, car chases, drugs and the cartel.  It filled with slapstick silliness and sexual references. After their car gets crashed by a truck, the pair persuade the truck driver for a ride to a local clothing shop to buy a new set of clothes. Cooper is no longer in uniform and Riva opts for a sexy tight short ripped t-shirt and jeans. (see picture above).

In one scene Cooper gets caught trying to steal a truck at gunpoint by the owner. Riva tries to run away, but changes her mind and returns to save Cooper by acting as Dr. Shannon, her lover. When the gunman threatens to call the police, Riva answers angerly, “This is racial profiling. I can’t be a doctor because I am Columbian?” (Hot Pursuit).  She proceeds to hug, grope and kiss a startled Cooper, whispering, “Kiss me, kiss me. Men love this.” (Hot Pursuit). The gunman watches the pair with a male gaze until he subsequently shoots his finger off.  The pair’s silly adventures en route to safety were too many to describe here.

I had high hopes for this film as it starred two strong women actors, one of them being Latina.  In the end Riva turns out to be an intelligent mastermind with an agenda of her own, who was only playing the part of being clueless. While the “Latin explosion” in the U.S. media entertainment has contributed to increased representation of Latinas/os in popular communications, it should be noted that this moment also “deflects the social, demographic, and cultural realities of everyday life among U.S. Latinos and replaces what is socially real Latino with historically familiar, acceptable, and contained images of Latinos that the U.S. can integrate into its own logic” (Aparicio, 2003, p. 92). This is why films like Hot Pursuit are still made.