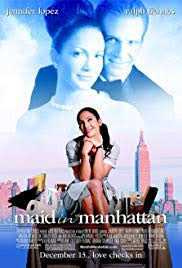 Maid in Manhattan (2002) directed by Wayne Wang, it is about Marissa Ventura (Jennifer Lopez) whom is a single Latina mother that was born and raised in New York City, working in hopes of obtaining a position in management.  She works as a maid in a luxurious hotel, she is labeled because she is Latina.  Latinas are known to obtain positions as housekeepers which is considered a low skilled profession.  Latina women are stereotyped as not being able to excel in their positions and just settle.  The film depicts the Latinx community as they are depicted in reality.  Since Marissa is contemplating on applying for the position she is called fancy by her co-workers.  It is presumed that they will only obtain a job in housekeeping or being a nanny for the privileged.

While working as a maid in an upscale Beresford Hotel, Marissa’s friend submits an  application on her behalf for a management without her consent.  She shortly learns about this when she is called to the office and is considered for the position.  Her co-worker told Marissa  “these are the golden years we gotta prove our mothers wrong” Maid in Manhattan (2002).  The film depicts hard working women that are striving for a better life. This film relates to the film Real Women have Curves (2002) as Carmen (Lupe Ontiveros) and her daughters are working in the factory and are striving for the American Dream.  The film portrayed the maids as they are depicted in reality.

Despite the fact that she has dreams in becoming a manager this dream is destroyed when she meets the senatorial candidate Chris Marshal.  Marissa portrayed herself as Caroline and went on a lunch date which got here fired.  When Chris could not locate Marissa and was describing her to Caroline he assumed Marissa was Mediterranean with a young boy.  He was stereotyping Marissa based on her looks.  Caroline also stereotyped Marissa by calling her Maria because of her complexion and her Latinx appearance.

When Marissa lost her job her mother Veronica told her “keep dreaming dreams that will never happen” Maid in Manahattan (2002).  Her mother assumed that Marissa was just a good cleaning lady.  This is very similar to Real Women Have Curves (2002) as Carmen assumed that Ana (America Ferrera) was going to be subjected to the same life that she and her daughter had.  “This pattern is most apparent in RWHC when Carmen adamantly rejects Ana’s desires because she is a woman and her role is to serve her family while her father, grandfather, and Mr. Guzman all encourage her to pursue higher education (Baez, 123).”   They didn’t believe in excelling in life, they were complacent with having a simple job. Both of these films depict a message that if they can work together and inspire each other they can prosper.

Baez, Jillian M. Towards a Latinidad Feminista: The Multiplicities of Latinidad and Feminism in Contemporary Cinema. Popular Communications. (2007):109-128. Web.

4 thoughts on “Maid in Manahattan”