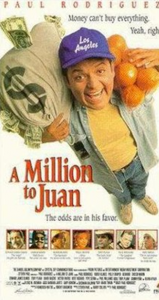 A Million to Juan (1994) is a romantic comedy film directed by Paul Rodriguez, Rudy’s cosine “Javier” in Born in the East LA (1987), of which his directorial debut. The story is Mark Twain’s “The Million Pound Bank Note”.

There were many stereotype of Mexican culture described in this film, for example not paying rent, economic difficulties, the way they dress, and the type of work they do and so on.  Also, there was a tragic death because of economic problems.  Though Juan was born in the U.S., he did not have sufficient documentation and was under threat of deportation. He was selling oranges at an intersection for his living.  To be in the lower income class is tough to live in this society.  The heroin Olivia made herself to fit into the Caucasian community by having a Caucasian boyfriend.  She was ignoring her emotion and kept staying her Caucasian boyfriend.  She was choosing to be successful in this society in economy, social class and wanted to keep her stable life.  Olivia could not choose her true love, Juan, because she had to assimilate with Caucasian culture.  If she chose her Latin culture, and true love, she would be in an insecure life and have more risks to live with.

Olivia was working in an immigration office and helping people with documentation including Juan’s documentation.  She was dating a successful Caucasian banker.  However, he was very bossy and did not appreciate Olivia’s Mexican culture or food.  For example, he complained about the taste of the fried beans in a restaurant, disliked a Mariachi coming to their table, he never purchased any roses for her from a Latina at a restaurant, and finally he asked for a hamburger at the Mexican restaurant.  In addition, he was talking on the phone for work while eating with her at the restaurant.  He treated her improperly, very rude, and did not care for her.  He never expressed enjoying his time with her.  She was also not enjoying sharing time with him.  On the other hand, she always had a good time when she was with Juan.  Even though joining Caucasian culture helped her social status, it negatively affected her mentally.  Minorities often have to sacrifice a part of themselves to function in the U.S.

In the society of white superiority, or prejudice against Mexican people, Olivia and Juan were sharing the same feelings in many scenes.  For example, they hesitated going to the party that was full of Caucasian people, appreciated night view, and wanted to own a restaurant, etc.  It was obvious that they like each other, however, Olivia kept being with her Caucasian banker boyfriend.  To be successful in this country, people need to transition their culture to Caucasian’s culture.  They need to speak English, to eat American food, to live in their community and live as a Caucasian.  It is not conformable at all, and most of the time it is stressful shift.

Even though people struggle with assimilating, they want to avoid being in lower income class.  Being in the lower income class is life threatening.  In the film, they could not fix their heater and one girl died, Juan’s bathroom was not fixed either, and Juan could not purchase what he wanted to buy in the store.  The government should help immigrants in their transition to avoid the dangers of living in a low income class.

In conclusion, Olivia had never think about choosing her true love.  If she did, she would struggle economically, be in the lower income class, and have trouble obtaining a stable life.  Those reasons are enough for her to ignore Juan’s existence and true love until the last scene of the film.  At the end Olivia chose Juan.  Juan became a restaurant owner and they were living a happy life.  In addition, I saw Edward James Olmos was wearing white suits.