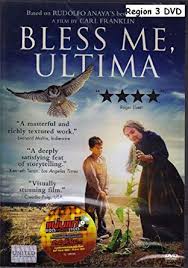 The film shot in 2013, “Bless Me Ultima,” shot in Santa Fe and Albuquerque New Mexico by Director Carl Franklin. He brought to life the 1972 novel of the same name written by Rudolfo Anaya. This film showed the struggle of a Mexican family living in the plains, the struggle to protect his family from small town justice and the pressure to keep them together. This film encapsulated the boundaries of faith, religion and ancient medicine which in this film provided healing and comfort for the community. The intertwining of the two, religion and ancient healing has been an item of discussion even today. Can they co-exists and welcome the practices one another without being something diabolical, with a negative connotation like witchcraft?
The main characters Ultima played by Miriam Colon; the young boy Antonio played by Luke Ganalon; Tenorio, played by Castulo Guerrra, the father Gabrriel played by Benito Martinez and mother played by Dolores Heredia. These actors weaved a story line with Antonio being a central figure in the film as he develops a relationship of respect and love for his grandmother, Ultima. Her wisdom was one to be revered and relied on, although, they felt her powers were from another source.
Some men in the community were convinced after a time of drinking that her powers were from an evil source even though they had relied on her ability at one time or another of help or healing. However, Ultima teaches Antonio to respect and embrace the environment. She identifies various plants that can be used to provide natural healing and health to one’s body, mind and soul. As the film develops one of Gabriel’s sons, Lucas sees a group of witches, which were Tenorio’s daughters performing a ritual with the blood of a chicken. He is then stricken with a curse as a result of seeing this.
Ultima is ultimately summons to the place where Gabriel’s son is bed ridden. Antonio the young protégé observes as Ultima confronts Tenorio about the curse. Tenorio is in the tavern with his friends. She is strong-willed, determined, unafraid and unapologic. Having seen and experienced the best that life could bring and the worst. She tells Antonio as she attempts to ease his curious mind that, “good will always stand against evil.”
Ultima, was not afraid to stand in the face of an adversary. I can imagine Antonio as he witnessed firsthand what doctors were not able to do and the Priest; but his grandmother and her knowledge was able to rid his uncle of that evil spirit. What confidence not only did he witness in his grandmother, but even the more the love and respect and adoration he had for her as a woman and miracle worker.
The curse is broken and the uncle is healed. Ultima reminds Antonio that, “the evil they cost will fly into their faces.” How potent that statement was as it encouraged Antonio to do good all his life. Eventually, Tenorio loses one daughter and promises to revenge his loss by killing Ultima. His attempts failed as he ended up getting his eyes plucked out by an owl as he sought revenge. Miracles do happen as with the healing of Lucas the uncle stricken with a curse and even with Antonio as he stood between a deranged Tenorio as he pulled the trigger on his revolver as he pointed it at the head of Antonio and the weapon did not discharge itself. Basically what you do to others will come back to you, whether it be good or evil.
In the end grandmother, Ulitma on her dying bed after giving final instructions lays her hand on Antonio in symbolism of passing along or transferring the “blessing” to her protégé Antonio. Beautifully set up with many themes to consider as we evaluate our choices in life.

3 thoughts on “Bless Me Ultima”