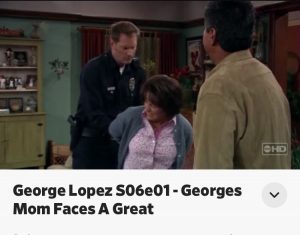 The George Lopez Show aired from (2002-2007), with a total of six seasons and 120 episodes. The Sitcom is based on a Latino Family who have both Mexican and Cuban ancestry. The character of George played by George Lopez himself is second-generation Mexican American and his wife Angie, played by Constance Marie, is first-generation Cuban American. George and Angie’s diverse cultural upbringing gives the show a balance that contributes to the show’s overall comical success.

We can see how producers Bruce Helford, George Lopez, and Robert Borden emphasize on the stereotypes that the Latinos Communities have about each other along with stereotypes that come from an anglo perspective.  The cultural differences between these two families are evident in the show. Angie and her father Vic played by actor Emiliano Díez, are depicted as exotic and easy-going Cubans who have a great father-daughter bond as opposed to George’s relationship to his Mexican American mother Benny, played by Belita Moreno, is represented as a troubled and negative one. The differences between these two cultures are also seen in Hernandez Article, Excess spaces.  Hernandez writes how Cubans and Mexicans are often seen in a different perspective, Cubans are seen as exotic and heavy accented while Mexicans are seen as troubled and more unassimilable in film and Television (Hernandez, p.86).

George’s Mother Benny who is a single mother is depicted as bitter women, bitter over George’s dad abandoning them when George was a little boy. Because of this Benny is depicted as an aggressive, emotionally abusive and neglectful mother. Who is often talking about smoking a cigarette or wanting to go to the bar for a drink. Benny’s character outlook on life is very negative, possibly due to emotional or mental illness.

Consequently, George is depicted as a traumatized adult who has flashbacks of his traumatizing childhood and who makes references to his mother’s lack of affection and inadequate upbringing.

While the show is based on comedy, we can see how the producers and writers of the show use comedy to portray the Latin matriarch as aggressive

and abusive.  On the other hand, Angie and her father have a wonderful relationship and seem to come from an upper-class family. Though, George always seems to make fun of Vic because he is a Cuban refugee with a heavy Cuban accent and different political and cultural views.

Episode S06e01 is a great example of the overall structure of the show. We have Benny being arrested by a white police officer for her involvement in a robbery thirty years ago but blames George for telling the Police she’s in the house where she gets arrested. Benny’s attitude towards her son is not far from the truth for many people who might have emotional problems, or who suffer from mental illness or substance abuse. The Producers create a balance with Angie’s side of the Lopez Family by creating a more positive and wholesome family outlook by showing how Vic Angie’s father is supportive of his Daughter. 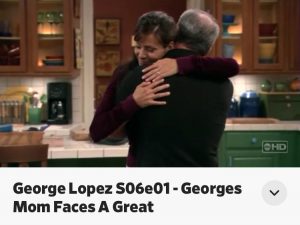 1 thought on “The George Lopez Show / comedy and culture”