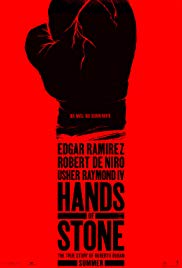 Often time films that recreate historic mainstream contemporary sporting events take on an exceptional task and fail to give new perspectives of the event that make the film better than the event itself.  That was the case with the film Hands of Stone (2016), the biopic – biography film – of International Hall of Fame Boxer, Roberto Durán “Manos de Piedra” (Hands of Stone).  The film naturally explains Durán’s childhood in Panama during the 1960’s and specifically focuses on the Panama Riots of 1964 in which Panamanian students began riots in protest to American controlled Panama Canal and what was known as the Panama Canal Zone which was created for Americans to live while they worked in the canal.  This scene immediately helps explains Durán’s distain for all things American after meeting legendary boxing trainer Ray Arcel (Robert De Niro) and refusing to accept him as a trainer because he’s American.  Similarly, the film American Me in which Santana’s mother is raped by Anglo American sailors the scene of Panamanian rioters gives a clear understanding of how Durán will feel about Americans for the remainder of the film.  The events that unfolded in Panama in the 1960’s were parallel to the Chicano movement that was unfolding in the United States and ultimately in Hollywood in the following years.

Other parallels between Santana from American Me and Durán are that they both grow up in impoverished conditions.  While Durán only knows of his father being American he does not know him. On the other hand, Santana has a father that has animosity towards him, and it is evident throughout their childhood.  Both men come out of their childhood with distorted characterizations of manhood because of this. Fregoso notes this in her book “The Bronze Screen” in which she points out:

American Me perpetuates a popular myth: the absence of parental love and a strong male role model are the major ingredients of youth-gang deviance.  Given the films total disregard or mention of poverty and underemployment in barrios as major factors contributing to the appeal of gangs, this popular myth is particularly misguided, perhaps even dangerous, especially in light of right wing’s campaign against so-called ‘welfare-mother’ in barrios and ghettos.

Yet Durán’s life story follows what Olmos attempts to portray in his film American Me.  Durán as a youth, like Santana, finds himself behind bars as well.  Granted the need to join a clique was not there since the film did not present any type of racial or caste power pyramid.  Instead this was an opportunity for Durán to get tougher and sharpen his natural fighting talents.  He is later saved by his soon to be career long trainer “Plomo”.  It seems that motive for deviance and gang culture is one that will continue to be debated for years to come.

Hands of Stone illustrates how Panamanians felt about American occupation in the Canal Zone. Since its inception in 1903 the Panama Canal was viewed by Panamanians as an invasion on the country’s sovereignty.  Interestingly enough, the United States recognized Panama’s sovereignty – from what used to be part of Columbia – just days before the signing of the Hay-Bunau-Varilla Treaty of 1903.  (Langley)  Which demonstrates American interest being thrust on surrounding Latin countries despite Americas fight against imperialistic European forces in preceding decades.  The United States was set to return the Panama Canal back to Panama in 1979 which also transitions us to an older version of Durán.

Durán, now a professional boxer, has been making “huevónes” of his opponents with Ray Arcel in his corner and as his father figure.  There is not much to relate to Durán’s persona in the film because the film only provides two aspects of his life, boxing and as a husband.  Even when Durán has children there are only glimpses into the type of relationship he has with his children, other than the fact he names his three boys Roberto.   The one message that is repeatedly driven throughout the film is that Durán dislikes Americans and the reason behind that is his memories of American occupation in the Panama Canal Zone.  One can make a comparison between “Corky” Gonzalez and Roberto Durán as pioneers for a movement of self-discovery and patriotism for Chicanos and Panamanians (in Durán’s case).  Gonzalez, the writer of I am Joaquin (1967), noted “journey back through history, a painful self-evaluation, a wandering search for my people’s and most of all my own” (Fregoso 4), could have very well been the inspiration for Durán except he was portrayed as an illiterate athlete.

In Roberto Durán’s distain for Americans and his aspirations to be a world champion boxer he set his sights on his next opponent, the iconic American boxer Sugar Ray Leonard.  To Durán beating Leonard is beating America.  During this time a clip of Ronald Reagan is shown where in 1976 he says, “We should tell Panama’s tinhorn dictator just what he can do with his demands for sovereignty over the Canal Zone. We bought it, we paid for it and they can’t have it.” (Times)  The film redirects its audience to watch Durán reach the pinnacle of his career when he defeats Suger Ray Leonard by decision in a fifteen round fight and conquers the WBC Welterweight Title.  Shortly after, it is a rather quick demise as it now brings to light that his promoter has scheduled the rematch without consulting Durán first and thus leaves him unprepared.  This ultimately sets Durán up for the notorious “no mas” in which he stops the fight because he realized he was so unprepared.

Being a fan of boxing and knowing Durán is held high in the list of greatest fighters of the world made this movie a disappointment.  It really did not do a good job of focusing on Durán’s story but rather kept giving us branched off story lines with Durán as the trunk.  The relationship that Durán and Leonard built and maintained would have been a great one to have more insight from.  That would have been something you could not find in old fight footage from the two.

1 thought on “Hands of Stone”