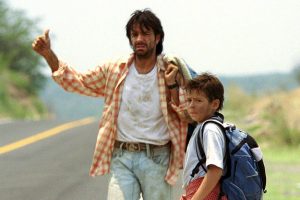 Under the Same Moon

La Misma Luna, Under the Same Moon (2017) is a story of the love between a mother and her son, and a film that raises awareness about the difficulties of crossing the Mexico- U.S border.  Under the Same Moon, produced by Patricia Riggen and Gerardo Barrera, exposes immigration issues within immigration reform laws and reveals negative stereotypes assigned Latinos who seek to better themselves.

Under the Same Moon is a sentimental story that defines the love between a mother and her son, who are divided by a boarder.  Under the Same Moon introduces a story between Carlitos, a nine-year-old boy, and his mother Rosario, an undocumented citizen that leaves him under the care of his grandmother for a period of four years while she works in Los Angeles CA, who are forced to be separated by legal borders but united by their love. The phrase, “Under the same moon” is the only connection Carlitos has with his mother as he remembers her throughout the film.  After a four-year period of waiting for the return of his mother Rosario, Carlitos starts a long and difficult journey across the Mexico-U. S border to find his mother after the death of his grandmother.  Carlitos undergoes several dangers throughout the film as he crosses the Mexico- U. S border. As he starts his journey to Los Angeles, he is smuggled inside a closed poor ventilated seat of a car, sold by a junkie possibly to a human trafficker, and almost captured by U.S Immigration and Customs Enforcement agents during an ICE immigration raid.

Although, Under the Same Moon was criticized to be too sentimental, it reveals the struggle of single mothers who like her male counterpart is forced to seek a better life for her family. As an illegal immigrant, Rosario is forced to seek employment in the domestic field due to her lack of resources as an immigrant to an unknown country. As stated in the film by Enrique, one of Carlito’s many helpers along his journey, “No one chooses to live like this”. Enrique reminds Carlitos not to give up, as he’s ready to turn himself in to be deported to Mexico since he’s unable to find his mother and feels abandoned.  Enrique points out the various jobs done by Carlitos in the few days as an immigrant to earn money to pay his way to Los Angeles to find his mother.  Even though Carlitos is portrayed as a very intelligent boy with keen memory as he can travel from Mexico to LA and finds his mother only by the geographical details of LA provided by his mother through their phone conversations, Carlitos is depicted as Mexican tomato picker and dishwasher boy. Like his mother who is also depicted as a housekeeper and nanny to an Anglo-American family.  Immigrants and refugees are entrepreneurs, job creators, taxpayers, and consumers. They add trillions of dollars to the U. S. Gross domestic product, or GDP, and their economic importance will only increase in the coming decades as America’s largest generation (M.D. Nicholson)

Even though, Under the same Moon was released in 2017, its story unfolds within the 2004 immigration reform laws that include Driver’s license for immigrants. Even though, Rosario takes public transportation in this film, many immigrants in real life, with the ability to drive, awaited the approval for driver’s license in California. However, according to Arnold Schwarzenegger, who served as California’s Governor from 2003 to 2007, immigrants represented a security threat. The Washington Post reports, Schwarzenegger vetoed a bill on September 22, that would have given as many as two million illegal immigrants California driver’s licenses, saying the measure failed to provide sufficient security provisions at a time of heightened terrorism fears. Besides the dangers of crossing the Mexico-U. S border and the fear of prosecution and deportation, immigrants were also subject to negative identity imagery from the dominant culture. According to Fregoso (1993), “It is within cultural discourse that Chicano and Chicana culture workers experimented with alternative Notions of culture identity, (p 28)”.  Immigrants to seek a better future, like Rosario, and assimilate and adapt to the dominant culture through language and legal employment, should be considered a factor within future immigration reform laws and removed from negative stereotypes portrayed in films like these and many others.

No Driver’s Licenses for Calif. Illegal Immigrants (2004. September, 24). The Washington Post. Retrieved from

2 thoughts on “Under the Same Moon-Carlitos’s Journey”