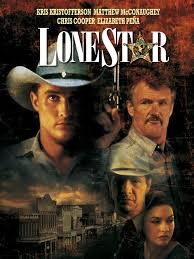 The film Lone Star (1996) by director John Sayles is filled with lots of twists and turns and an unexpected ending. This western, mystery, romantic film appealed to me because the two Latina actresses in the film, Miriam Colon and Elizabeth Peña, play characters that go against the traditional roles most Latinas tend to be cast in.  “Representations of Latinas in cinema have historically been sparse and stereotypical-limiting them to roles such as the spitfire, clown and the dark lady” (Ramirez Berg, 2002).  Taking a departure from the norm, Colon plays Mercedes, a restaurant owner and Peña plays her daughter, Pilar, the local high History school teacher.

Although Mercedes is Mexican, she has very little tolerance for other non-white people and negatively talks about them. During a scene at her restaurant kitchen, she disrespects her staff, comprised of undocumented immigrants, saying they have no common sense and accusing them of stealing from her. Mercedes assimilated to the American way, in fact, she was living the American Dream, owning her own business, a car and a house. She preferred to be spoken to in English and has no desire of returning to her homeland.  When Pilar inquires if she would like to take a trip to Mexico so she could see how much her hometown had changed, Mercedes responds, “You want to see Mexicans? Open you eyes and look around you. We’re up to our ears in them” (Lone Star 1996).  This comment showcases the contempt Mercedes feels for her own people.  Her treatment of her employees is disgusting and incomprehensible.

Ironically through flashbacks, we get to see how Mercedes arrived to Frontera.  She is depicted crossing the river from Mexico to the United States illegally, just as some of her employees might have done themselves. Perhaps her undocumented workers remind her of how she used to be.  “The subject who first crossed over is not the same subject who returns to the borderline (Fregoso).

Pilar on the other hand, embodies the concept of “Latinidad Feminista that transgresses historical representation of Latinas in U.S. cinema in offering Latina subjectivities that are hybrid, fluid, and complex” (Baez, p. 109).  During a classroom meeting with parents, her methods of teaching the history of the United States, with a multicultural approach is criticized and questioned.  The parents want her to teach the subject by the textbook, however Pilar is passionate of including other cultures in the lessons. Pillar is a “mesitizaje (racial mixture)” (Baez, 117). Toward the end of the movie, Pilar learns that her biological father is White, and not Mexican as she was led to believe. Another difference from the typical Latina roles is in the way Pilar dresses.  She is a teacher and as such, “She dresses in plain clothes and does not appear as most Latinas are portrayed in stereotypical roles as sexpots” (Baez, 118).

It was refreshing to see a film where the Latina actresses had roles that went against the usual stereotypical type. Roles like these in major films are few and far between. As for the twists and turns and an unexpected ending? I will leave it up to you to screen the film and discover them for yourself firsthand. You won’t be disappointed.

Baez, Jillian M. Towards a Latinidad Feminista: The Multiplicities of Latinidad and Feminism in Contemporary Cinema. Popular Communications. (2007):109-128. Web.

3 thoughts on “The Women of Lone Star”