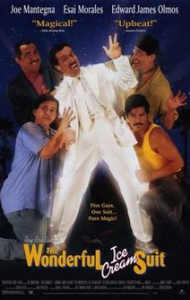 The Wonderful Ice Cream Suit (1998) is a comedy film by Disney, directed by Stuart Gordon and written by Ray Bradbury.   Nominated Annie Awards, Fantasporto and the winner of Fantafestival “Best Direction” Stuart Gordon (1998).  The original story was in a magazine “Saturday Evening Post ” short story “The Magic White Suit” in 1958.  This short story was renamed “The Wonderful Ice Cream Suit” in 1972 and was applied for variety of a television drama, a stage musical, and play.

The author Ray Douglas Bradbury (August 22, 1920 – June 5, 2012) was an American author and screenwriter, was born on August 22, 1920 in Waukegan, Illinois.  The director Stuart Gordon (born August 11, 1947) is an American filmmaker, theatre director, screenwriter, and playwright, was born in Chicago, Illinois. (Wikipedia) Both Bradbury and Gordon have no relation or back ground of the Latin culture.

However, the film was filled with beautiful Latin culture.  At the beginning, a salsa rhythm was heard, and then the music exploded into a live Latin band.  While Jose played his guitar, a group of women danced salsa with pretty costumes.  Throughout the film we see character enjoy tacos, explore traditional Latin homes and buildings, a Latin night club, a bully car and listen to live Mariachi bands.  Stereotype of Latin culture, women are stereotyped, while men play more dominant characters.  However, this film did not follow into the stereotype on sexuality, most likely because it is a Disney film.

The Los Angeles River was used as a motif “over the river”.  If a person passes the river, there is downtown Los Angeles, not the East Los Angeles any more.  It may be expressing the boundary of cultural difference or economic freedom which was similar to the border of Mexico and the U. S.  As another motif, the main item of the suits which may express the stereotype of Latinos’ dress up culture.  In the story, there was a strong friendship growing among the five main characters.  It was depicted as very pure hearted, innocent and Disney film “friend ship”, however, right after observing American Me and learned about intercourse and dominant, plus Edward James Olmos was in The Wonderful Ice Cream Suit, It was difficult to change mind from hard core friendship to tender hearted friendship.  One motif I did not know the meaning was there were 2 Anglo Saxon men in the tailor shop where the main characters bout the suits.  I believe there should be a meaning.

This film is very happy and pure, however, some people could create a bias to Latin culture while viewing the film.  In the film, there were many stereotypes of Latin culture.  For example, Men like women, a good friendship in a men’s group or the East Los Angeles was expressed too beautiful like we discussed unreality in “West Side Story” (Herrera).   “The wonderful Ice Cream suits” is an innocent pure Disney Film to me.  Should I insist not to show the wrong information to this very interesting film which includes friendship, romance, also, giving you dreams, hopes and energies?  Probably, Latin audiences may feel this film as filled with insult, stereotype and unreality.