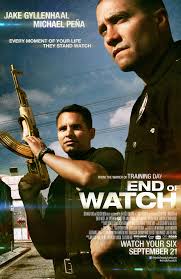 Los Angeles, California has been portrayed in film and television as a place where traditionally Anglo American and Mexican American cultures intersect. However, there are also many films and television shows that show the conflict that can arise within a certain ethnic group when there is a prevalent subculture within the dominant culture. In the film End of Watch (2012) we see these cultural differences on display between Los Angeles police officers Mike Zavala played by Michael Pena, fellow officer Orozco played my American Ferrera, and the various fictional “Curbside Gang”/non-fictional Sinaloa Cartel members they encounter throughout the film. The film depicts the police officers as heroes and the criminals as villains but there are several instances where conflict is heightened by the ethnic makeup of the officers when opposing the criminals.

One such instance is when the police officers are called to a noise complaint. They arrive to a party being thrown by well known Curbside Gang members and when officer Orozco arrives she engages with a character, played by actress Yahira ‘Flakiss’ Garcia, known as La La. As the officer asks La La to stop smoking in front of them and have respect, La La responds that Orozco should “take a hit like back in the day”. This interaction leads the viewer to perceive that Orozco has resided in the neighborhood she is patrolling and has known this person from her childhood. Although they have chosen very different paths in life, they are familiar with one another personally. La La and Orozco are both stark contrasts of who Chicana/Latina women have previously been represented in film but it is interesting that neither are referenced by first name in the film. These nameless women are not the faithful wives or suffering Mexican mothers (Fregoso, 6) as seen in the past. Both are fierce in their own way and, although they are both represented as Chicana, they are very much opposed in the way they are shown in the film.

Another instance in the film where intercultural differences are shown is when Officer Zavala and his partner Brian Taylor, played by Jake Gyllenhaal, unknowingly come across a home that is being used as a hub for the Sinaloa drug cartel. They enter an empty house but find dismembered, decapitated human bodies and Officer Zavala is clearly struck by the imagery. His partner Taylor does not speak Spanish but on the wall there is a statement written in graffiti, also in Spanish, that ends in “ja ja ja”, the English equivalent of “ha ha ha”. Zavala appears heartbroken that anyone could look at the bodies on the ground and laugh at their fate. This scene seems to show viewers that the within the inner city-scapes and ethnic suburbia there is immigrant deviancy (Adrian, 88). Although in the film the Sinaloa cartel is based in Mexico and Zavala is a Chicano, the cartel has operatives here in the U.S. working in conjunction with the Curbside Gang and that is very different from the life Officer Zavala has chosen.

There are many different social issues to be discussed when critiquing End of Watch. There is the idea of the worthiness of a woman when considering marriage, masculinity and how it is depicted, the cultural differences between Anglo and Chicano males, and others. But the conflict between the Chicano/a officers and the gang activity they are opposing was one that stuck out in particular. Ultimately the film is about the bond between two police officers but there is definitely something to be said about the disconnect between members of the same cultural background and how individuals choose completely different paths in life within the same physical space, with the same opportunities.

2 thoughts on “End of Watch – The Conflict Within a Culture”