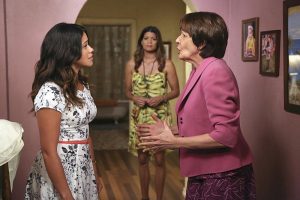 Jane the Virgin (2014) introduces us to a trio of women that gives us a look at the past, current, and future of Latinas in America. The comedic, fictional story of Jane Villanueva (Gina Rodriguez) begins with Jane’s grandmother, Alba Villanueva (Ivonne Coll) comparing the virtue of virginity to a delicate flower. Using a white flower, she demonstrates to a young Jane that once the white flower is smashed-up, it cannot be returned to its original state. Alba’s explanation sets the plot for a Latina female perspective of the story that will unfold in the following episodes.

Jane’s story is told by a voice-over narration by Anthony Mendez, who has a heavy Spanish accent, with a deep voice that sounds suave, sexy and smooth like a Casanova, as it engages you in understanding that you are about to witness a tumultuous, humorous, dramatic, love story, episode by episode, and scene by scene.  Jane the Virgin further punctuates the love story by utilizing the style of a telenovela. The change of scenery in the story is colorful, fast-paced and playful while expressing the feelings associated with cultural differences that may be familiar to someone like me, a Latina. Jane must live her life in a space that is, culturally, somewhere between the past and the future.

Using the white flower as a prop, and the narrator talks you flashes of memories depicting both Jane’s childhood and the present. As described by Fregoso, “the interplay between multiple time referents, the past in the present tense of culture” (Fregoso, p. 21). Jane is connected to a traditional past represented by Alba, whose character is grounded in deep, Catholic, religious beliefs with antiquated ideas of marriage before sex. Jane’s memories about the flower, conflict her character because she must navigate her life decisions between her grandmother’s advice and her own feelings. It becomes clear that this will be a recurring conflict throughout the series because Xiomara or Xo (Andrea Navedo), Jane’s mother, is placed between Jane and Alba.

Xo is the only daughter of Alba and she is an aspiring singer, single mother. She gave birth to Jane at the age of 16 and lives with her mother and Jane. She is portrayed as is an oversexualized, scanty dressed, fiery Latina. Xo’s character is portrayed much like the images that artists like Lupe Velez, described in the documentary, The Bronze Screen: 100 Years of the Latino Image in American Cinema (2002), as a woman with “loose morals” or a “dim-witted señorita” (De Los Santos, Dominguez, & Racho, 2002). She humorously insinuates to Jane, throughout their interactions, that sex before marriage is acceptable, and to some degree, encourages Jane to “try out the waters” before marriage. Jane does not completely embrace Xo’s view, because she is looking towards a better future for herself.

As is common in many Latina roles, Jane’s character lives at home with her mother and grandmother and she is a struggling waitress (De Los Santos, Dominguez, & Racho, 2002). The difference is in the modern way to view the Latina because Jane aspires to become a teacher and dreams of becoming a writer. The theme of her dream is expressed throughout the series with the way each episode ends and begins. A typewriter effect is displayed across the screen and the text is used by the narrator to introduce and end each episode. This ensures that Jane’s aspirations are not forgotten as they remain embedded through each phase of her life, depicted by each episode. Especially, when she is faced with her life altering moment in the beginning of the story.

Jane’s character faces a moral conundrum as the plot of this story reveals. Jane is inadvertently, artificially inseminated with her boss’s sperm. Jane is visiting her gynecologist and falls asleep while waiting on the exam table. Her doctor, Luisa, walks into her room and because Luisa is pre-occupied with the discovery of her wife’s infidelity, from the night before, she mistakenly inseminates Jane, a virgin.

But in true telenovela style, there are several plot twists that the narrator cleverly talks us through. One twist is that Luisa is in fact, the sperm donor’s sister. Next, the sperm donor, Rafael, will become Jane’s second love interest, who happens to be rich and handsome. Also, Jane will need to figure out a way to explain the issue to her grandmother and most importantly, her fiancé, Michael. Throughout the series, Jane will simultaneously balance her culturally based conscious and her desire for a better future. Driven by her heart she must make tough decisions because just like the flower, once compromised, things will never be the same again.

6 thoughts on “Jane the Virgin- A Conflicted Love Story”