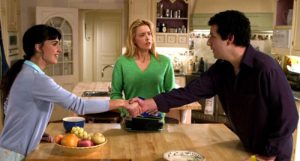 The movie Spanglish (2004) is a romantic comedy about an unintended love interests between the leading role John Clasky, played by Adam Sandler, who is the loving husband and father and Mexican housekeeper and nanny, Flor Moreno who is played by fellow Latina Paz Vega. In the film we see many of your typical Latina stereotypes, the fiery Latina, the strict Latina mother, and maybe most importantly, the temptress or Latin Lover. In this film she is portrayed as the foolish housekeeper who’s both naïve persona and beauty unintentionally seduces the man and falls in love. In film no role is more predictable for Latinas then this one, and although this film is meant to be lighthearted it plays on many stereotypes that prove that even in a film with the best intentions Hollywood can’t shake being racist.

This films stereotype of the Latin Lover comes in many forms, the first and most obvious is in the form of Flor herself, from her name which conveniently means flower to her beauty she has all the makings of a typical heartthrob. She graces this upper middle class family with her calm and collected attitude and more importantly compassion. From fixing all of Bernice’s clothes after her mother buys her the wrong size to simply “being there” when John is dealing with Deborah’s infidelities Flor is always around and always helping. With that, it is clear the directors goal was not to instill a dislike toward the character Flor but rather to tug on the heartstrings of the viewer and see her as not the typical Latin Lover but rather as someone who is non-threatening.

The Latin Lover is not only beautiful they are also seductive and in Spanglish Flor’s character is a rare combination of both seduction and virtue. In the film she is portrayed as a woman who is uninterested in forming a bond with the family as she tries to keep the relationships professional. However, we see her slowly falling for John specifically because he is the opposite of the machismo Mexican men she is used to being around and ultimately it is her relationship with the kids that eventually seduces John. In the end however Flor refuses to come between John and his wife and after a magical night together she quits her job and leaves. This is a subtle nod to the stereotype of the Latin Lover and is a reminder to the audience that although Flors character seems timid she herself is temptation.

This stereotype is extremely hard to shake because it not only gives a bad name to Latinas who work in the industry but it paints of picture of a false reality, one that says a woman, especially a Latina woman cannot be trusted. Although films like this one try to paint a better picture for roles like Flor’s the fact is that these stereotypes show the mold that Hollywood has created for the Latinx community and even with the best intentions they cannot shake from the negative stereotypes.

6 thoughts on “Spanglish The Latin Lover”