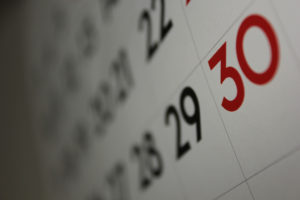 GTD. Getting Things Done. I first heard about it on Bonni Stachowiak’s podcast, Teaching in Higher Ed. It’s a system to manage all the many things (tasks and projects) in one’s life. It’s been around for a while. I’m late to the party.

So first, why am I blogging about this when there are so many great bloggers who’ve used GTD for years, including Robert Talbert (another person I met through Teaching in Higher Ed) who’s written some great work on using GTD in academic life? It’s definitely not because I’m setting myself up as some sort of expert on the topic. In fact, I’m writing these posts about the process, or at least my process, of setting up a GTD system at the same time I’m transitioning from five years of adjuncting into a tenure track position as someone who’s new to the system and flawed in her execution of all things requiring habit and structure.

What motivated me to do this? I first heard about the system last winter, read the book and made a stab at it. It helped briefly, but I wasn’t committed enough (habits come hard for me), I didn’t trust the system to work, I tried to use too many new tools (yay tech!) at once and things fell apart, though I will say at least I never had hundreds of emails in my inbox again. But this past spring, just as the semester ended, something happened that shocked me and made me decide I needed and wanted to commit to GTD and its idea of a trusted system to Hold All the Things. What happened was I opened my email and had a note from an editor at MELUS (Multi-Ethnic Literature of the United States) journal asking me how the review of two books I’d promised was coming.

Reader, I had no memory of this commitment. Like, none. Had the email not contained my earlier response saying “yes” to reviewing these two books, I would have thought the editor was mistaken, that I hadn’t agreed to this. Further, I had no idea where in my study the books were or any memory of receiving them. Somehow this commitment to a journal and organization I care about and respect had vanished into a memory hole in my head, so much that even with the reminder I still couldn’t recall it. Yes, this spring had been the most stressful period of my life (and I include in this the semester where I wrote 150 pages of my dissertation in four weeks), but still I was scared and disturbed by this. How could a promise I’d made be so completely forgotten?

I don’t want to lose track of things. I don’t want to forget promises. That’s not the sort of professor, friend or person I want to be. So Getting Things Done, with its promise of helping me create a system I can trust to hold the things my brain clearly is not able to hold, feels like the right thing to try.

This felt like the right moment too. Although I’m working multiple jobs through the summer, I’m nowhere near as taxed as I was last semester. There’s time to experiment and read how other people are doing this so I can have a system in place when the fall semester and my new responsibilities as an assistant professor start.

I’ve learned a little bit from my attempt last winter. This time I’m not using any new tools, but rather using familiar tools in a new way. I followed the GTD guide to setting up Evernote as a collection system. I’ve used Evernote for more than seven years in various ways so it’s familiar. Likewise, I’m continuing my calendaring system. I use a paper Passion Planner and iCal and sit down and sync them at least once a week. My reason for using both was that while I love iCal, when I was all digital I tended to not look forward often enough. So I’m trying to change as little as possible in terms of what I use and make changes in how I use these tools.

So how did the week go? Slowly and carefully. The collecting thing is new and currently occupying more brain space than I expected. I’ve read around and made a few tweaks, the main one being picking three actions each day as things that are most important (MIT) to get done that day. I’m doing this not just because having a little structure helps me focus, but also because right now I’m in a weird bit of a paradox. The job that I’m giving up in six weeks is making a lot of demands that could fill every working moment. But in anticipation of being on the tenure track, I want to be sure I get in some research time every day, not least so I can finish the MELUS book review. That is, I don’t want the things that are yelling loudest to drown out the things that are actually most important long term.

The second weekly review I did took three hours. Which is better than the four the week before, but still too long. I think part of the problem is that I haven’t created clear outcomes for each of the projects I have and am doing that a bit piecemeal during the review time. My hope is that by next week each of them will have an outcome in addition to a next action.

The other problem I’m having is that I clearly have no idea how long some things will take me to do. For example, one of my MITs today was to read and take notes on a book introduction. It’s twenty pages and I imagined it would take an hour to an hour and half.

It took four to do the sort of detailed close reading it deserved in preparation for writing a review. I suspect (hope) that doing this means that the rest of the book will read quite easily (it was a pretty comprehensive introduction). But it taking so long meant my other two MITs gone done pretty late in the day. Then again, had I not planned to do this and wanted to be able to say I’d done the three things I’d determined to do today, I probably would have given up after two hours and gone to breakfast with my partner.

And that’s it. This isn’t going to be a blog that tells you how to do GTD — I wouldn’t presume to do that. Instead it’s going to be a shambling tale of what I’m trying and how it’s going.