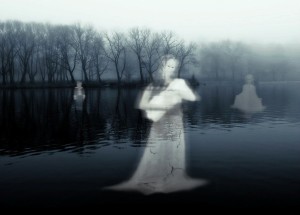 Comparing the story of La Llorona with Bless Me, Ultima, there are many parallels that can be seen when a close reading is applied. Tony’s upbringing and his interactions with both his dreams and nature show definite signs that suggest La Llorona had an influence on Rudolfo Anaya when writing Bless Me, Ultima. As La Llorona captures her victims through her comforting, peaceful, and compelling presence, we see this explicitly when Antonio learns about the mermaid and the golden carp from Cico: “He said it was a women, resting on the water and singing a lonely song. She was half women and half fish — He said the song made him want to wade out to the middle of the lake to help her, but his fear had made him run” (p. 109). Showing consistencies with the water as being the setting in which La Llorona is seen, the loneliness and weeping, as well as the profound affect the presence has for one to join and rescue, are all present within this scene with Antonio.

Another example of how La Llorona relates closely to Antonio’s upbringing is the constant cries Antonio hears. “Hey Toni-eeeeeee. Hulooooo” (p. 106) as well as “Antonioooooooo” (p. 52). These mysterious cries Antonio consistently hears also relate closely to La Llorona, as the weeping women lures her victims through her cries and her own distraught.

Further paralleling this, we see a strikingly similarity with La Llorona within one of Antonio’s dreams: “In the dark mist of my dreams I saw my brothers. The three dark figures silently beckoned me to follow them….we walked across the well-worn path in silence. The door to Rosie’s opened and I caught a glimpse of the women who lived there” (p. 70). This scene especially struck me as hinting toward La Llorona — three dark figures that mystically persuade one to follow them in silence to a woman. Although this scene includes four people total, whereas La Llorona usually has three, the compelling and mystical urge to follow the figures to a women’s presence is an overarching motif of La Llorona.

As scholar Jane Rodgers tells us, “Antonio knows he must get home before storm worsens, yet he is compelled to linger “at the gate of the evil women”” (Rogers, 66). This is, once again, a key example of the story of La Llorona showing through Antonio’s life. The mysterious and attractive nature of the women at Rosie’s have a unique affect upon Tony, as he knows he needs to get home but simply cannot pull himself away. It is the odd fascination that Tony shares with the victims of La Llorona — they lose rationality and become immersed in the charismatic women that lure them.

Pinpointing these La Llorona qualities allows us to view Bless Me, Ultima in an even more Chicana/o gothic light. Weaving a traditional Spanish parable into the novel, though subtly, brings the novel to life and creates a more intimate connection with the gothic. Tony’s dreams and the constant cries he hears which may seem arbitrary at first, now come into light as being another element of the gothic. I thought it was also notable to point out how La Llorona is used with Tony as he is just a child, once again being consistent with the tale, as La Llorona is aimed toward children.