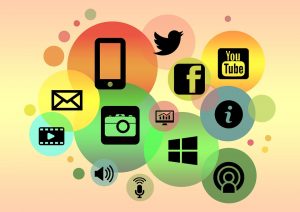 This summer I’m doing something new.  I’m teaching a class on online communities and cultures for California State University Dominguez Hills (new class) and it’s all online (new experience). I confess, I was nervous. How much of my teaching is, after all, dependent on personal interaction in the classroom?

My reaction after the first week? I love it.

I’ve taught several hybrid courses where the class meets for seven or eight weeks and then does half of its other “meetings” through online interactions. They went pretty well, but it felt like a huge leap between that and an all online course. I was fortunate in that my friend, Adeline Koh, had taught an online class on a similar topic and generously shared materials and advice.

The first bit of her advice that I took was to hold the class using Canvas‘ learning management software rather than using the university’s Blackboard system. It’s my first time using Canvas as an instructor and it does have some quirks of its own, but I like it miles better than Blackboard, perhaps because it makes discussion and peer review such central parts of its structure. The surprise was how fast the students adapted to it given that they all come from a background of using Blackboard. So far, no complaints. A side benefit is that since their enrollment in the Canvas class isn’t dependent on their university status, when a few were dumped from the course due to non-payment, they were able to stay up on the work while they worked out their enrollment status. Bonus.

I worried that a class set all online would lack the human relationships and interaction that I so value. But how foolish, really. Those are important to me so they become central to any class I’m teaching. Plus, despite having lived a vivid online life for the past twenty years on Usenet (where I moderated a newsgroup and met my partner), IRC, up through to the present interactions with friends and students on Twitter, I was discounting the online as impersonal. Very ironic, especially given the topic of the course.

The architecture of the class is on Canvas. We also have a class group on Facebook and then each of us has started a blog on the topic of our own choosing for this class. Mine is on Coffee in Los Angeles. It’s also a first because it’s the first time I’ve blogged on a domain that I don’t own (we’re using WordPress.com) and I don’t think I like it!  This was also on Adeline’s advice. I originally planned for us to each do a WordPress install using Reclaim Hosting‘s student program. But this class is compressed — we only have five weeks and, I suspect, the logistics of setting up a WordPress install and getting everyone’s working would have taken up much of the course. So that will be for another time.

Something I didn’t expect? I learn students’ names much faster online than I do face-to-face. This is no doubt deeply revealing about my degree of introversion and how I relate to people well through the screen.