Sopa de fideo originated in Spain; however, after conquering Mexico the Natives put an authentic twist to the broth. Making it what we now have come to know as sopa de fideo. The name is exactly what it is, sopa means soup and fideo means noodle.

Sopa de fideo or sopita de fideo, as my family refers to this bowl of deliciousness, is a staple dish for most Mexican families. No matter how old you are or think you are, sopita de fideo is the ultimate comfort food. It’s a soup that is made with fideo pasta and a tomato broth. It may not sound like much but the simplicity of it makes it special. There has been research conducted to confirm that this is a traditional Mexican food and just as common as frijoles (Smith-Morris, 2016). It is very similar to the chicken noodle soup but so much better and is both a lunch and dinner dish. This dish is a big hit with children, but definitely satisfies the mature palate of adults (Smith-Morris, 2016). Additionally, sopita de fideo is extremely affordable as well as flavorful.

It’s been really interesting to learn now, at my unknown age, that people enjoy sopita de fideo with a variation of ingredients and that there are recipes that are different and original that include adding ground beef. At work, someone shared with me that they add shredded cheese to theirs and that their kids actually enjoy it with a bit of mayonnaise. I think this adds to the significance and greatness of this dish. It is so flexible and adaptable that it can be tailored to fit anyone’s specific preferences or diet needs.

You’ll have to forgive me, although the Sopa de Fideo recipe has been passed down from generation to generation in my family it has never been written down onto any paper. I, like everyone else in my family, was taught in person, practicing hands on and conducting many many taste tests. Therefore, there are no exact measurements and I am no chef. I am a mom who cooks for her family. In this recipe you will have to bear with me because my instructions will not be technical nor fancy, they will be in laymen’s terms and as straightforward as possible.

So, with all this said, this recipe is not the original that my great- great- great grandmother once made but that is the great thing about it, it’s flexible and there is really no wrong way. You can improvise and just add any ingredient or remove the ingredients that you don’t care for and enjoy it. This list of ingredients can be added to make this soup even more satisfying and filling.

And you will not want to skip on having lemons, tortillas, and avocadoes on hand. Fill the pot you usually use for making soup about halfway with water. Place on the stove with medium heat. Add in one-fourth onion, one clove of garlic and about 2-3 pinches of salt. Wash your chicken, I like using leg and thighs but use any of your favorite pieces. Only four to five pieces are needed. At this time, I wash all my vegetables that I will be using. Since you are already at the sink it just makes the process flow easily.

Now go ahead and place the washed chicken inside the pot you prepared above. Cook until chicken is cooked, removing dark suds or foam from the top of the water. The dark suds are said to be bad toxins that the chicken released at the time of death. I don’t know if this has any truth to it or if it has been scientifically proven but I choose not to take my chances and try to remove as much of it as possible. This can also apply to other types of meat.

Meanwhile your chicken is cooking, you can prepare the sauce that will be the base of your sopita. Begin by chopping two to three tomatoes into fourths, the more tomatoes the richer the red color of the broth. If I’m making it as a main dish, I like to make it a bit redder than if I’m making it as a side dish. You will also chop about half of an onion and grab two garlic cloves. Blend these three ingredients into a puree. No need to add salt because the chicken is cooking with salt and you will be adding chicken bouillon later. Since the chicken will take about 30- 40 minutes to cook start slicing all the vegetables you decided on. I don’t like them to small, so I slice them into medium sized pieces. This goes for potatoes, squash, and carrots. I do not chop the cilantro; I leave it whole even with the stems. This will give it a little more flavor and it will be easy to take out if you have a picky eater.

Now right about here, you have about twenty minutes to do something else or get some other stuff done around the house. Check your phone, check on the kids or guest, bathroom break, put the clothes in the dryer or whatever it is that you need to do.

Back to work… grab a deep-frying pan and put in four teaspoons of oil. Let the oil heat for about two minutes then add the entire bag of fideo. Stir it around to make sure all the fideo is covered with the oil and continue stirring until brown. Be careful, the fideo should be turning brown but do not let it burn. Once the fideo has fully cooked, grab colander and your blender that contains the pureed tomato, garlic, and onion. Use the colander to pour the puree into the pan with the cooked fideo. To make it easier, slowly poor the chicken broth from your cooked chicken over the colander. 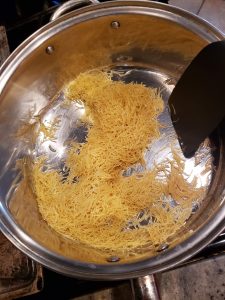 The aromas of the puree and the chicken broth meeting the fried fideo are so pleasing and appetizing. At this step, you will usually have your family come into the kitchen and inquire what your making and how much longer it will take to be done.

After pouring it all in to the pan, add the sliced vegetables into the soup and roughly two tablespoons of the chicken bouillon. Add in more bouillon if needed, it will depend on the amount of broth. Lower the flame and let it cook for about ten minutes. Meanwhile shred the cooked chicken and add it, along with the cilantro into the fideo. Stick a fork into the vegetables to check that they are cooked, if so, turn the heat off. You are done. Sopita de fideo can be very filling and presented or served as the main dish especially by adding from the list of healthy ingredients above. This dish can stand on its own and satisfy any size appetite. Just adding in chicken and vegetables like squash, potatoes, carrots and chicken, sopita de fideo is wholesome and hearty.

As a side dish:

Just like the common American soups, chicken noodle or tomato, the sopita de fideo without the additional ingredient’s pairs perfectly with a sandwich or even a salad. But my favorite combination is carne asada. Serve a nice hot bowl of sopita de fideo, grab a warm tortilla, put the carne asada, a couple slices of avocado, salsa or hot sauce, and squeeze some lemon on top and bite. Then top it off with a spoonful of sopita. All the flavors will blend together in your mouth to create something so humble and savory.

Sopita de fideo is very nutritious. In fact, this is often made for children who are not interested in eating because they can’t sit still or are finicky eaters. It can be packed with a bunch of important nutrients and vitamins either way you make it, simple or elaborate. Although, since fideo is pasta it is not keto friendly because of the carbs.  Even though, authentically homemade is always the best route, if your pressed for time or haven’t gone to the market sopita de fideo can be made with minimal ingredients and you can substitute things like real fresh tomatoes for tomato sauce and garlic salt instead of fresh garlic but their will be a loss of the good vitamins and nutrients.

My connection to this dish started before I was born, I truly believe. This came about because the one craving that my mom had the very first three months of her pregnancy with me was sopita de fideo. She explained to me that it was the only thing that would stay down through her morning sickness. My great grandmother and my other family members would make it for her every other day or so. They laughed when they would tell me the story and said they had to do it so that I wouldn’t come out looking like fideo. This is a myth that is common amongst Mexicans… if you don’t give a pregnant person what they want to eat then the baby will look like whatever that particular food was. So, my appreciation and love for this soup was fate. As soon as I could start eating solids, I was eating sopita de fideo.

As a child, this was a dish that I could not and would not refuse. The smell of sopita de fideo filling the air was enough to get me away from anything that I was doing. Even if I was playing barbies, coloring, or watching television. This soup was and is my favorite. Even back when I couldn’t record the show I was watching on the DVR. If I missed it that was it there was no rewind or pausing like there is now. But it didn’t matter, on top of that, I had to eat at the dinner table away from the T.V. The soup warmed up my belly and hugged me to my core as it has for so many years.

Sopita de fideo holds a special place in heart and I know it might sound silly to some because it’s just food. But this soup has helped to strengthen relationships and bonds, it has made me feel better when I’ve been sick, it gave me peace and comfort when I needed it, it has nourished my body, and it brings back wonderful memories of people that I care deeply about but are no longer here with me in the physical world. I’m thankful that I get to share these memories with those closest to me.

Sopita de fideo now brings joy to my immediate family too. It brings my children to the kitchen even when there busy doing other things. It starts great conversations around the dinner table. I am able to feed it to my family with confidence knowing that it has so much good stuff in it for our bodies. Even more so, it has helped us when we have struggled financially or just needed to make it for a couple of days before payday. This dish reminds me and my family to be humble and grateful for each other and everything we have. I plan to continue sharing sopita de fideo with those I treasure and love the most.

1 thought on “Sopita de Fideo, what home feels like.”