Ah…potatoes. We like (some even love) them right? From the salty taste of the hard crisped chip in our mouths (umm), to the baked spud bursting with sour cream, chives, and that ooey, gooey “buddha” (butter), to the sunday morning staple that was in our home for breakfast consisting of bacon and eggs with hash-browned potatoes cooked in bacon grease remnants, with sauteed onions and green bell pepper (can’t you just smell the aroma?).  Well, for my class presentation, I chose a potato that was always in our household for holidays and special occasions that was turned into the decadent, ever so sweet tasting, and always a winner, my mama’s sweet potato pie.

Why did I choose the “sweet potato” pie?  Well, I’m glad you asked! This pie has been a staple with African American’s since way before I was even born, and especially in our house. Mama used to make these, as I remember, not only for us, but for our neighbors as well.  You see, her pies were “special.” That’s all we, (my sisters and I) would hear. Now, my pies really don’t hold a candle to my mother’s because, honestly, I think she did not put down EVERYTHING on her recipe card that she put into those pies!  For real. My pies are only a close second in comparison to what I remember tasting.

So, Who’s on First

It is said that the sweet potato was first brought to this country by the Brits. Well, not so fast. Depending on where you look or who you ask, it is said that the yam was the first to appear. So who is right?  What I discovered is that the Brits brought the pumpkin pie recipe over during slavery, but that slaves started using a sweeter potato (did you get that what I just did right here) for the pies the because spices used to sweeten anything was not readily available to the slaves. They used what they had and was only allowed to use these special spices needed in cooking the pies for the main house, the master’s quarters. 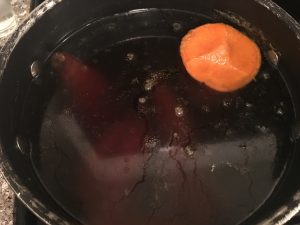 So What’s the Diff?

In the United States, yams are hard to find, are imported, and rarely found in local grocery stores. You can find them in international or even ethnic markets. There are over 600 varieties. Sweet potatoes, on the other hand, being more used and more popular in cooking, are more plentiful around the world.

Don’t Get Them Toes Cut Off!

So as you can see, sweet potatoes are sweeter and moister than yams but lower on the glycemic index which means that their carbs are released more slowly into the bloodstream.  As stated in my class presentation, a sweet potato pie is a “sometime” food mainly because of the added sugar, butter and milk the cook has to put in the recipe. With that being said, can we talk? Diabetes, yes big D, is rampant not only in African American community, but everywhere in the United States.  Unfortunately, we have become a country of diabetics (pre, type 1 and type 2). According to just about anywhere you read or any form of media you watch or listen to, it’s no surprise that this is unfortunately true, even among our teens and younger children! According to the ADA (American Diabetes Association) in 2018, 34.2 million Americans, or 10.5% of the population, had diabetes. Nearly 1.6 million Americans (about 187,000) have type 1 diabetes, and that includes children and adolescents and 14.3 million seniors (age 65 and older, diagnosed and undiagnosed). Approximately 1.5 million new cases of diabetes is reported for Americans each year.

Why This Potato and not That Potato

We as Blacks in this foreign place called America have, as everyone knows, struggled to be accepted.  We were forced here against our will, and, after that, we were stripped of everything — culture, family, our native language of Africa, and some did not even make it long enough to be stripped–They lost their lives during the uber ride over here.  When I would hear my mama and her friends laugh and talk around the holidays while preparing all that food, even as a little kid, I knew that time was a special time. They were laughing, telling jokes, whispering stuff (eye roll here) in each other’s ears so the kids (us) could not hear what they whispered. They were  generally happy I think. But I did not remember them being THIS happy every regular day. What I DO remember were the worries they had but tried to hide from us, the tears, the anguish, the everyday struggles and sometimes the fear. Yes, even as a kid I could just feel the fear. Now, I didn’t know exactly why they were fearful but I could sense it and we’d hear bits and pieces of their “hushed” conversations.  So I guess I decided to make this pie as a tribute to my mother, who has long left this earth, as a way to publicly say “Thank You”. Thanks for being my mother and raising me to try to be the best that I can be, even if you did  not have any experience to draw from to show me an example, you always seemed to do your best. Thanks for never giving up, even though sometimes I know you wanted to–but you didn’t. THANKS. My love for her and hers for me will never cease because when I bake this pie, it’s like I can still hear the commotion in the kitchen, the smell of all the food cooking, the laughing, the jokes (theirs), the good times back then.  No worries, just a great time in my life. Mostly. 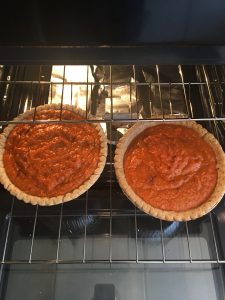