If you grew up in one of the Los Angeles neighborhoods that belonged to the Los Angeles Unified School District (LAUSD), and you were a student at one of the schools within the district from the 1960’s through the 1970’s, you had the opportunity to enjoy cafeteria food that was freshly made by cafeteria cooks on the premises. During this time, you were probably not enjoying the most nutritious food in the world, but quite frankly, homecooked meals during that time were probably filled with equally unhealthy nutritional value. According to an L.A. Weekly online article, LAUSD continues to struggle to provide healthy food lunches for its students (Alimurung, 2011). However, if you were a student during that time period and you lived in homes with one or two working parents or if your family had limited funds for food, then the meals at school were a precious commodity because they would have been the closest thing to an actual homecooked meal. While classes were taking place, there were many dishes that were prepared by the lunch ladies, which were endeared and known on campus on a first name basis.  They made chimichangas, peanut butter cookies, French bread pizza, hamburgers and French fries, but out of all the dishes that they conjured up, none reigned supreme such as the coffee cake.

This was evident when about nine years ago one of my Facebook groups, dedicated to the Boyle Heights neighborhood area of Los Angeles appropriately named, You Know You Are From Boyle Heights When….,  was in a frenzy with comments with excitement about the rare and special treat that many of us had the pleasure to enjoy as children. Someone got a hold of the original Old-Fashioned Coffee Cake -1954 recipe and posted it online 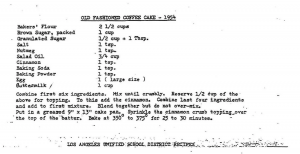 Many of my online friends reshared the recipe directly with me and also reshared it with the list of their own friends or publicly for the world to see. This was such a great surprise to my online friends and to me because we never imagined that the recipe existed. I asked myself, could this actually be the real deal? How did someone get a hold of the recipe? I must admit I had the urge to try baking it, even though I rarely bake, because I did not want to miss the opportunity to get a slice of the sweet treat. Then I had to ask myself, in a world filled with so many specialty coffee/bakery shops, gourmet bakeries, and access to a world filled with online recipes to bake just about anything we can imagine and crave, why did we all get so excited to read about the recipe?

“Some of my best memories growing up were having the cinnamon, buttery treat for breakfast”

“For real, I remember buying other kids’ piece because 1 wasn’t enough. I sure would pay now for a few pieces”

“Nothing tastes as good as childhood, thanks for the memories!!!”

“Someone asked me if I knew what LAUSD coffee cake was? I almost fainted”

We all seemed to have wonderful memories about the experience of looking forward to eating the coffee cake made on location at one of the many schools located in the L.A. area anytime between the 1960’s to the early 1980’s. Then as I read more comments, I grew more curious about what I was reading and I began searching the internet for more information about the validity of the recipe and I found a blog that made mention of the coffee cake and the memories it brought to so many.

Author Jen Jenk posted a blog on Devourtheworld.com about the coffee cake recipe on November 30, 2009. Jenk stated, “It was our go-to snack/breakfast during recess. You know…back in the day when calories didn’t mean anything because you could burn it off simply by breathing” (Jenk, 2009). Simply put, this coffee cake was enjoyed by everyone as carefree children. A user named Lolly writes: “I am a product of the LAUSD edu-machine (Eagle Rock High School) and this coffee cake was about the only thing enjoyable about that time” (Jenk, 2009). Another user named Roxie Johnson writes, “In junior high I would always ask for seconds. And yes, it was that good” (Jenk, 2009). A user by the name of Whiteg even cited that the coffee cake was “the only reason he/she attended school” (Jenk, 2009).  This recipe seems to be unforgettable and the name is instantly recognizable. It is clear that the mere mention of the LAUSD coffee cake brings about good memories for everyone, including my own family.

I began a conversation with my husband about the coffee cake and his first response was, “I used to fight for it in school”. I could not believe what I was hearing and when I asked why, he went on to explain that the neighborhood he grew up in was really poor and that no one was willingly going to give up the extra special treat. Therefore, him and his friends would challenge each other to fight one another in order to win an extra slice. My husband grew up in one of the poorest neighborhood areas in Boyle Heights named the Estrada Courts housing projects. His mother was single and struggled to keep food on the table and a stable rood over his head.  I believe that, like most of us, he finds it difficult to talk about the tough times during his childhood because quite frankly, it’s probably hurtful. He told me that when he thinks about his childhood memories, he tries to focus on the good parts and for him, the good parts include the food lunches he enjoyed during his childhood and the company of his schoolmates- even though he fought with some of them.

I grew up in Boyle Heights, California and I attended grade schools in the LAUSD until 1988. I grew up with a single mother and two younger sisters, each 11 months apart. My sisters and I were very close and my mother raised us with very “old school” ideas. She arrived to the United States, from Mexico, in 1968 and she refused to fully adopt new ideas, basically American ones, of child rearing. My mother was very controlling, when we were kids; she had us attend church daily at 7:00 A.M., we needed to complete daily chores, get good grades at school and at home we only ate for sustenance in order to avoid practicing gluttony. Of course being little girls, we did not understand her “crazy ideas” and we blamed her backward ways on the fact that she was from Mexico and that if we listened to her, we would be crazy just like her and we wanted desperately fit in with all of the other kids at our school. By the time I was in the third grade, I realized that there was a loop hole in her plan to control us; the schooltime lunches. My mother worked a lot and she did not have time to pack us lunches, therefore, she was forced to accept whatever the school served us. To our joy, the school served a wonderful, sinful, warm, cinnamon, sweet treat that we would have never, in our wildest dreams, enjoyed at home because it was too good! Whenever the coffee cake was baked at our school, you would be able to smell the butter, soft bread, cinnamon, and the nutmeg from the minute you stepped onto the school grounds. My sisters and I knew for a fact that if our mom knew how good and scrumptious the coffee cake was, she would have forbidden us from eating it, so we enjoyed every bit of it, every chance we had.

I thought about what the coffee cake meant to my sisters and me so when I decided to write about the recipe, I shared it with them. My sisters instantly remembered the sinful enjoyment of the coffee cake. My youngest sister, Ruby, is a baker and when I mentioned the coffee cake recipe, she immediately became excited and wanted to try and replicate the recipe. She offered to bake the coffee cake at her house, with the help of her teenage daughters and she insisted we make a special occasion out of it. She invited my sister Jennifer and me, along with our families. We made a plan to not to tell our children the back story about the coffee cake until we were ready to eat it because we wanted to test their reaction.

First, we bought all the ingredients in the recipe:

Next, we followed the recipe instructions to separate ingredients into different bowls: Next, we started the longest process which was to slowly mix ingredients in the separate bowls: 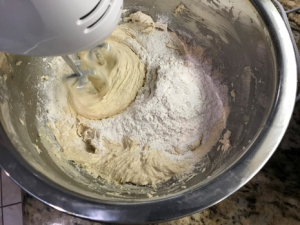 Finally, the last step was to pour the batter of mixed ingredients onto the baking sheet, and wait patiently while it baked. The final product was great. The smell of the coffee cake was unmistakably familiar. The aroma and the buttery taste of the warm sugar, flour, cinnamon and nutmeg was so comforting and nostalgic. It was like being a kid again. Our family agreed that the coffee cake was delicious but they didn’t understand fighting for it or the buzz on social media. As stated by Alexandra Sifferlin, “Of course, what counts as comfort food is different person to person” (Sifferlin, 2015). My sister and I rejoiced because we got to share a little bit of our childhood and that was truly memorable.

I recalled the special memories of the warm delicious slice of cake and I realized that it is our best version of nostalgia. The coffee cake was special to all of the Facebook users, the blog readers and to my husband for different reasons, however, the feeling of comfort seemed to be the same because the feelings attached to the enjoyment of the coffee cake linked us directly to memories of the best part of our days growing up, including me.

3 thoughts on “The One and Only: LAUSD Coffee Cake”