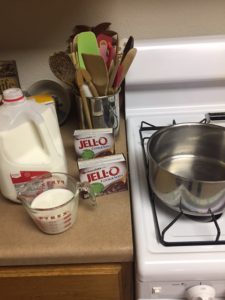 As a child growing up, my Mom would make my brother and I chocolate pudding as a treat. You can buy pudding already prepared or you can make pudding by just adding cold milk to a box or cook it up on the stove top. My mom used the stove top and we loved to eat ours warm with a little bit of whipped cream.

To make this simple dessert you need a box of Jell O chocolate flavored pudding and 3 cups of whole milk. You put the milk in a pot on medium heat and add the pudding contents. Stir mixture until it boils being careful not to scorch the milk. Put the pudding into small bowls and refrigerate or you can eat it warm. 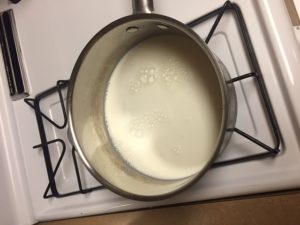 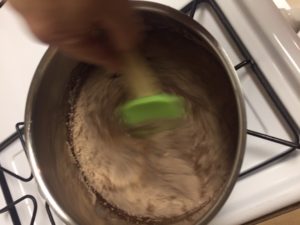 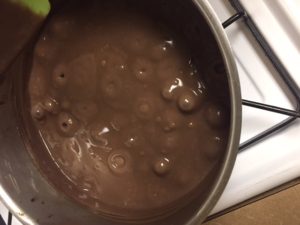 Bring Pudding Mixture to a boil 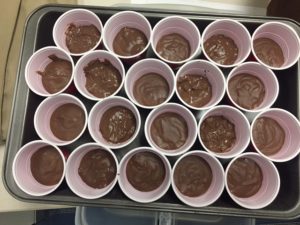 Some history on Pudding – The original pudding was formed by mixing various ingredients with a grain product or other binder such as butter, flour, cereal, eggs, and/or suet, resulting in a solid mass. These puddings are baked, steamed or boiled. Depending on its ingredients, such a pudding may be served as a part of the main course or as a dessert.

Boiled or steamed pudding was a common main course aboard ships in the Royal Navy during the 18th and 19th centuries. Pudding was used as the primary dish in which daily rations of flour and suet were prepared.

Some history on Jello- In 1897, in LeRoy, New York, a carpenter and cough syrup manufacturer, Pearle Bixby Wait trademarked a gelatin dessert, called Jell-O. He and his wife May added strawberry, raspberry, orange and lemon flavoring to granulated gelatin and sugar. Then in 1899, Jell-O was sold to Orator Francis Woodward of Genesee Pure Food Company.

In 1925 The JELL-O Company merged with Postum Cereal, Inc, that would eventually become General Foods Corporation.  Today Jell-O is owned and manufactured by Kraft/General Foods.

In 1927 Chocolate Jell-O was introduced and not long after discontinued.

In 1936 Chocolate returned to the Jell-O lineup as an instant pudding made with milk. The pudding became so popular that other pudding flavors were added such as vanilla, tapioca, coconut, pistachio, butterscotch, egg custard, flan and rice pudding.

These essential nutrients do more than just build strong bones. Studies have shown that drinking milk can help reduce the risk of osteoporosis, a bone-crippling disease that affects 28 million Americans, aid in weight loss, help lower your risk of colon cancer and more.

Chocolate is made from cocoa beans, the dried and partially fermented seeds of the cacao tree (Theobroma cacao), a small, 4–8 m tall (15–26 ft tall) evergreen tree native to the deep tropical region of the Americas. Recent genetic studies suggest the most common genotype of the plant originated in the Amazon basin and was gradually transported by humans throughout South and Central America.more.

Now that I’m a mom eating chocolate pudding with my kids brings back memories of my childhood and having this special treat made by my mom. With life these days I opt for buying pudding already prepared, but this class has taught me to reflect on my childhood and to appreciate the little things that my mom did for me and my brother. I hope that one day my kids will have some of these same memories about me that I have about my mom, I better get into the kitchen and start making some memories.