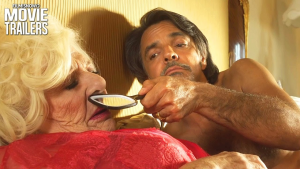 How To Be a Latin Lover (2017), directed by Ken Marino, is a comedic film about a Latin gigolo who is no longer in his young, prime adulthood.  In the beginning of the film, we learn that the Latin playboy, Maximo (Eugenio Derbez) aspires to be kept by a rich woman because the death of his father leads him to believe that hard work does not necessarily mean that you will attain all the things you wish for from life, specifically material things.  Maximo’s childhood is depicted in an isolated, rural desert home, in what appears to be Mexico, with his mother and sister Sara (Salma Hayek). At that location, his father accidentally blows himself up in his work truck after he barrels through their family home because he drove through the night to see his family and he falls asleep on the wheel. The family becomes homeless and while sleeping in a car one night, Maximo reveals to Sara that the tragedy has shaped his idea of how he wants to live out the rest of his life. He points to an image in a magazine of a beautiful white woman dressed in a gown with outlandish jewelry, standing behind a man that appears to be rich by his clothes and jewelry and staging and states he wants to be like the woman when he grows up, basically supported by a rich partner.

In the next scene, Maximo is in the vacation town of Acapulco, Mexico. 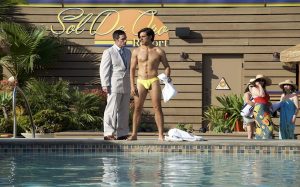 Set in what appears to be the 1980’s, he is now a young man, devilishly handsome, with beautiful brown skin, dark thick hair, and a gorgeous physique, which is on full display in small yellow speedo swimsuit, for all of the women sitting poolside. It is in that scene where Maximo’s life goal becomes a reality. He meets a white, 55-year old, rich widow who will fulfill his dream of being supported instead of working for a living. Maximo looks like the perfect specimen of a stereotypical Latin lover, which we have come to know by the works of some famous Latino actors such as the early 1900’s original Latin Lover, late actor Antonio Moreno, or by most of the work in the 1940’s-1950’s of late actor Ricardo Montalban. Montalban spoke about his experiences depicting a Latin Lover stating, “Scenes were beautifully shot, the romantic, beautiful scenes were not at all damaging” (De Los Santos, Dominguez, & Racho, 2002). Although, the image of a Latin Lover envokes an image of a debonair, smooth, gentle yet oversexed, womanizing playboy, I found it surprising that an actor with such caliber and cinematic experience would not categorize the objectification of some of his characters as damaging, but instead called it romantic, which is quite the opposite viewpoint that a woman might express, and this is how Maximo’s character diverges slightly from other Latin Lover images. 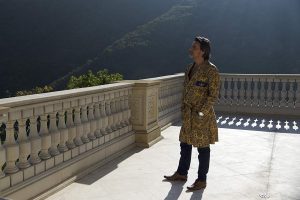 After the poolside meeting with his future wife Peggy (Renée Taylor), Maximo’s character is focused on the time period after Peggy leaves him for a younger man after 25 years of marriage. Maximo’s life in the mansion, prior to the break-up, is charmed and opulent. Wearing a luxurious silk robe, he rides around on a hoverboard, tans his body poolside, enjoys a private masseuse and does not lift a finger to help himself around the house. He is depicted as spoiled with every amenity or pampering he desires until his wife decides that it is over and kicks him out of her house. When faced with the realization that he must leave, Maximo demands his half of Peggy’s wealth, to which Peggy responds, “Oh no, no, no, you signed a pre-nuptial, so you’re not entitled to half”, and Maximo naively responds, “No, I signed a prenup” (Marino, 2017). Maximo is not portrayed as a debonair ladies man at this point, he is portrayed more like the “dim-witted señorita”, described by many Latinx actors (Fregoso, 1993) (De Los Santos, Dominguez, & Racho, 2002). From that point forward, Maximo must figure out what to do on his own because he has been supported by his wife and he has never had to fend for himself. As a last resort, he moves in with his estranged sister Sara and nephew Hugo (Raphael Alejandro). 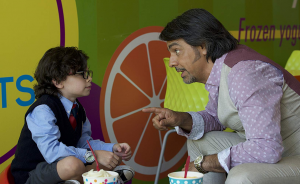 While living with Sara, Maximo tries to acclimate into a normal life by working in several odd jobs, helping out at home with Hugo, and giving love advice to both Sara and Hugo. He attempts to employ his old Latin Lover charms to help him get through his new life and get back to his old life. His motive, however, is not selfless, it is self-serving. Much like the usual stereotypical Latino images portrayed and critiqued throughout the years in film, he is trying to run a con by being sneaky and manipulative because he is lazy and ultimately what he really wants is to get the girl (De Los Santos, Dominguez, & Racho, 2002) (Fregoso, 1993) (Nericcio, p. 204)  His exploits to find another rich woman to take care of him, place him in situations of deceit and failure with his family until finally, Sara kicks him out.

It would be a tragic ending to see Maximo completely fail, however, this is a comedic Hollywood film and as such the underdog does, in fact, prevail in the end. There could have been a great lesson learned for Maximo however, he gets the girl and he is able to continue with a charmed life, solidifying the Latin Lover image.