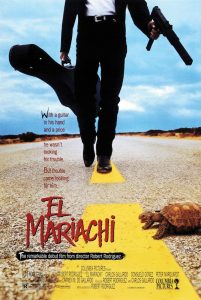 Many directors are known for a specific aesthetic associated with their style of filmmaking. David Lynch and Quentin Tarantino are two names that come to mind automatically and another is Robert Rodriguez. Rodriguez is known for displaying violence, almost to a hyper-violent degree, and mixing it with a little bit of camp, a style that is absurdly exaggerated and often fuses elements of popular culture, which can be seen in films like From Dusk Till Dawn (1995), Planet Terror (2007), and Machete (2010). These violent films have the ability to still maintain a certain level of brevity and display tender exchanges between characters which seems to be most evident in Rodriguez’s first feature length film El Mariachi (1992). This film also inspired what is now referred to as  “El Mariachi” style filmmaking, which is essentially a filmmaking style that appears to be low budget (because it was).

El Mariachi was both written and directed by Rodriguez and it is a film about mistaken identity. The otherwise nameless character of El Mariachi, played by actor Carlos Gallardo, is a traveling musician who is never without his guitar case. He arrives in town at the same time a criminal by the name of Azul, played by actor Reinol Martinez, also known to carry weapons in a guitar case has set out to kill a former crime partner. The film is set in a town adjacent to Del Rio, Texas and we see a main character who is trying to earn an honest living in a town that is largely owned by a criminal. The Mexico depicted in this film is one of almost complete lawlessness. Metaphorically, this town adjacent to Del Rio, Texas is “no man’s land, or better yet, “no white man’s land” (Fregoso, 66). A prison guard is seen taking a bribe, there is no law enforcement on the streets when multiple gunfights emerge in the center of the city, and overall no one is affected by the violence playing out in front of them. The gangsters have control of this city and further reinforces the stereotype that Mexico is a place where criminals are in charge.

An interesting character is the character of Domino, a bar owner played by actress Consuelo Gomez. She inherited the bar she owns from a gangster named Moco, played by Peter Marquardt, after he expressed his interest in developing a romantic relationship with her. She declined his offer and still remained in charge of the bar he gave her. She is an interesting character because she is independent and she is willing to resort to physical dominance if necessary to ward off anyone who may threaten the life she has established. Although Domino is very attractive, and El Mariachi sings her a song including his comments on her body, she does not engage in any physical relationship with him or anyone else in the film. She is not the sexually or morally pathological (Fregoso, 29) Latina that has been depicted in films in the past. She is a strong woman who can stand on her own.

Robert Rodriguez’s first feature length film went on to win multiple international film awards and became a commercial success for Columbia Pictures, now owned by Sony Pictures, which distributed the film in the U.S. It created a name for the filmmaker in Hollywood and allowed him to continue making films in the “El Mariachi” style he developed in making this film. It was a major change not only in independent filmmaking but also the success a low budget film can achieve with a gifted director’s vision and passion behind the project.