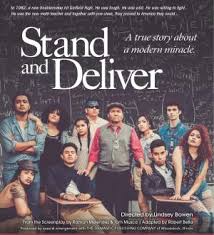 Stand and Deliver (1988) directed by Ramon Menendez is about a group of underprivileged delinquent Garfield High School Latino students from East Los Angeles.  The students are accused of cheating on their Calculus exam.   Jaime Escalante a new teacher comes in to the school on his first day to teach computers but soon realizes he will be teaching basic math.  As he is walking in through the hallways he realizes how badly the school is in disarray. Throughout the film the students experience racism and discrimination coming from a low income disadvantaged and some from broken homes.  The educators other than Escalante at Garfield High did not have faith in their students, they assumed they were all gang members and unable to be taught.  As Escalante walked in class the student were disrespectful, through him the finger and also stole the radio in his car.  This was a challenge and didn’t stop him as he knew that the impoverished high school needed guidance.   In spite of this, that didn’t stop Escalante from changing the philosophy of the school as he told his students that all they needed was “ganas” Stand and Deliver (1988).

One of the themes of this film is that the students suffered inequalities and experienced discrimination because of their identity.  The staff at Garfield High School automatically assumed that they were all the same since they had similar backgrounds.  This is a perfect example of what the teens in Zoot Suit (1981) experienced which led to their conviction of the Sleepy Lagoon Trial from the film Zoot Suit (1981).  “The club members were pachucos, urban street youth distinguished by dress (zoot suits), the duck tail haircuts, and tattoos (Fregoso, 22).”

These two films were very similar on how the inequalities and discrimination transcribed.  “Their appearance, which targeted them for state persecution, also made the pachucos ideal symbols of marginalization and victimization by Chicano nationalist (Fregoso, 22).” The teens in both films were stereotyped by their identity and they were not given a chance and assumed guilty.  After the students from Garfield High School passed the calculus exam the first time, they were accused of cheating because they all made very familiar errors.  The ETS could not believe that these Latinos from an impoverished community were capable to achieve passing scores on the exam.  The ETS was bias and discriminated against the Garfield students based on their identity and their surnames.  Escalante told his students “You already have two strikes against you: your name and your complexion. Because of those two strikes, there are some people in this world who will assume that you know less than you do ” Stand and Deliver (1988).  However, the ETS and educators at Garfield High that didn’t support Escalante were perplexed as to how was it possible for this disadvantaged school with underprivileged high school students to score so well.  They were being stereotyped based on there community they lived in and the way they presented themselves.

The students from Garfield High School in Los Angeles were not previously given an opportunity to excel because they were barrio kids. The students spent sleepless nights studying to pass the advanced placement calculus exam not once but twice to achieve the same score and to prove themselves. It is very unfortunate that if it wasn’t for Jaime Escalante to believe in his students, they would have never succeeded in proving the success to Stand and Deliver (1988).

6 thoughts on “Stand and Deliver”