A Mexican single mother Rosario left her 7-year-old son Carlitos in Mexico with his grandmother. She crossed the border illegally by swimming the river to enter the U.S. She was hoping to make a better life for herself and Carlitos by making better amount of money. She was doing housekeeping works in Los Angeles without authorization. When Carlitos’ grandmother, Rosario’s mother, passed away several years later, Carlitos decided to cross the border to see his mother.

In this film, precious Mexican culture was shown such as making chocolate milk every morning, dressing up Carlitos, Rosario’s pretty summer dresses, and showing the way to have a birthday party, and the foods. “The spatial movement of border crossing, and border crossing as the mixing of cultural forms and subjectivity” (67) The most I considered was the difficulties of working and staying in the U.S. without legal documents. I came here as an international student, but to keep my status, I needed to work to make payments of tuition. I am going to review the difficulties of being an undocumented worker, difficulties of financial improvement and difficulties of working conditions and difficulties to handle the fear of being arrested.

As in the scene of laundry mat, it was very difficult to change the life while working without legal documents. Employer paid only the minimum wages, and sometimes took more money away from the payment as a processing fee. In the film, Rosario got fired from a housekeeping work, without notice and got shrunk payment but she just needed to accept the situation because there was no way to fight or argue with the employers. She needed to save money by eating very cheap food. She was eating a cracker with a piece of chili in the movie. There is no hope to live a better life without legal documents.

While being an undocumented worker, being arrested is the most unwanted incidence. In the film, there were scenes of passing border. Mother was swimming the river, Carlitos was hiding himself in the seat of a car, and both are life threatening action. They cross the border successfully; however, they will never feel free form the stress from being arrested. In the scene of tomato field, there were inspection from INS, the people were arrested violently, and some people got hit by officers. I felt this was not right. Close to the last scene, Enrique got arrested by police officers. He was a good person, did not relapse into crime, but was arrested.  We can observe A violent immigration arresting video and ICE (U.S. Customs and Immigration Enforcement) news. 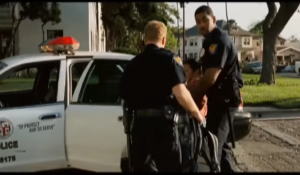 When I came to the U.S. as an international student, I was able to have a social security number, driver’s license and allowed to work 20 hours per week. Even though, I was a documented worker, I always had a fear of being arrest because I worked more than the limitation of 20 hours. I was doing waitress in a Japanese restaurant and I was told that when the green truck would stop in front, run away.  “For unauthorized migrants, there is no such thing as a “minor” arrest. Arrest can trigger immigration enforcement. ICE’s strategy involves using the criminal justice system, particularly jails, as places to locate deportable immigrants.” (Armenta, 3)  I wonder in what way we can change this corrupted law enforcement system.  Many good people are arrested violently and deported every day.