In today’s society, the word beautiful is completely defined by the media. It is no surprise that the models portrayed in magazines and television are taller and thinner than the average woman, but there is one more component that may not be as obvious, fair skin.  Ever since the term mestizaje came to be, lighter skin was seen as the dominant one. The idea of leaving behind the darker and more indigenous features, including skin color has been in our society since. But today this idea of “adelantando la raza” or advancing the race forward by marrying a light-skinned person and producing children lighter than yourself still persists in our society across different race groups.

Just a few years ago, when Yuly Marshall, an Afro-Latina dated a lighter-skinned black Latino, his parents persuaded him to stop dating her because of her dark skin. “They told him to find a white girl so he could adelantar la raza,” Marshall says. There exists a “kind of veiled racism, ignorance and denial—from Latinos and non-Latinos alike” that can make everyday life a challenge for Marshall and other Afro-Latinas because of their skin tone. Some of the reasoning behind this may be due to the fact that even though Afro-Latinas achieve high profiles in Hollywood and other industries, they are not usually seen as such in movies and ads. “Most Afro-Latinas play African-Americans on the screen and Latinas are depicted as light-brown hued” (Damarys Ocana). Zoe Saldana amongst these high profiles, says ““We tend to look for European roots and reject the indigenous and the African, and that’s disgusting. Being Latin is being a mix of everything. I want my people not to be insecure, and to adore what we are because it’s beautiful.”

But these are not the only races dealing with this definition of beauty. Indian culture, for instance, struggles with this component of beauty as well. An article recently published about the 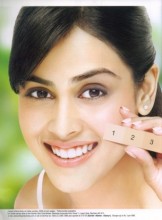 magazine Vogue India says that “many Indian people (mostly women) are so obsessed with fair skin they’ll go to the ends of the Earth to lighten theirs, they believe dark skin is ugly and light skin guarantees more opportunities in life.” Vogue India endorses this fair skinned beauty by featuring exclusively light-skinned models and celebrities and several skin-lightening creams. As the article suggests, “the average Indian person is not as light-skinned as models, celebrities and Bollywood actresses.” The reasoning behind this goes back to Indian’s caste system, people in the higher classes were lighter than those in the lower classes because those in the lower classes had to do a lot of manual work under the sun, thus lighter skin was associated with wealth and power back then. The fact that it is associated with “more opportunities” today shows that this same mentality continues because the culture itself still seeks for this distinction in skin color.

It is really a shame that women have yet another requirement to beauty and success. This is major flaw in the media today and a very sad reality for society. The idea of embracing lighter skin is not something that we decided on our own, it is something that people are pressured into by the media we see all around the society we live in and by the long history that this idea of lighter skin representing a higher class came from. This idea of lighter skin being more beautiful is something that has been engrained in us, but as Zoe Saldana pointed out people should embrace their skin color no matter what shade they fall into.