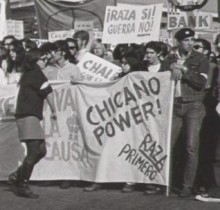 The Brown Berets is a nationalist group that was established during the 1960’s with Chicano and Chicana members, with their main focus being to help the Chicano community. The  goal of the Brown Berets was to help the Chicano and Chicana community specifically with police harassment,  inadequate public schools , poor health care, as well as low level jobs.

The Brown Berets were successful with being able to help the community by setting up free clinics and breakfast programs for their community.To protest against the public schools in the community, in 1968, the Brown Berets planned the East L.A. Walkouts, where thousands of L.A students protested education standards. The walkout was the largest school walkout in the history of California.The Brown Berets were also known for acting against police brutality against Chicanos.They protested killings and abuses that were committed by the L.A. Sheriff Department. The Brown Berets were actually modeled after the Black Panther party, which was a black activist group that aimed towards helping the issues of the inner city.By September 1968, the Brown Berets had grown Nationwide and opened chapters in California, Arizona, Texas, Colorado, New Mexico, Milwaukee, Chicago, Detroit, Minnesota, Ohio, Oregon, and Indiana.

There were however women struggles among the Brown Berets. The women were limited to secretarial jobs in the Brown Beret like writing and distributing the newspaper of the movement called “La Causa”. Women like Grace Reyes who was in charge of writing for ” La Causa”, would write articles about women within the Brown Berets and the Chicano Movement, as well as the sexist attitudes towards them, but they were not published and ignored. In 1972,  the original L.A. Brown Berets chapter dissolved because of speculated CIA involvement in the group.