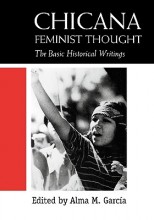 Please address the discussion questions for the following readings by replying to this post.  You do not have to answer all the questions, but be sure to demonstrate your familiarity with the reading.

What do you think of when you think of the 1960s and 1970s? How do these readings fit in with or change your impressions?

Enriqueta Vasquez’s “The Woman of La Raza” was written in response to the same conference, the First National Chicano Liberation Youth Conference in March of 1969, where “El Plan de Aztlán” was written and adopted.  What connections can you see between the two documents?  What sort of conflict, if any, do you read into them? How did women of color respond to the civil rights movement (both Black Nationalism and the Chicano Movement)?  Why was it important that Marta Cortera “found” feminism with Mexican roots?

Alma Garcia discusses a series of Chicano movements in New Mexico (for land rights), California (for farmworkers, education and against the war in Vietnam) and Texas (political rights), among others.  How do you think the differences between these movements and their participants impacted each region’s Chicano movement?

Garcia also writes about Chicano Nationalism (Chicanismo) and the depiction of the “Ideal Chicana.”  What are the problems associated with such an idealized image?  Does it relate to the notion of a feminism based on “multiple oppressions”?

How did Chicanas organize themselves? What were the mechanisms and how was writing important to their organizations?