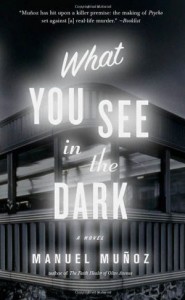 What You See in the Dark by Manuel Muñoz is a noir thriller set in 1950s Bakersfield. The fictional story of Mexican-American Teresa Garza’s romance with and murder by Anglo Dan Watson, is set against a re-imagining of the location scouting and filming of the shocking motel scenes in Hitchcock’s Psycho.  The story itself is told in the harsh lights and darks of desert life — for whatever reason as I read and saw the story in my mind’s eye, the novel was in black and white, sunlight harsh and brilliant while the nighttime shadows were dark.

The novel has an interesting structure, counterpointing the romance of Dan and Teresa, with the location experiences Janet Leigh (referred to only as The Actress), cast as Hitchcock’s (who is only named as The Director) initial victim.  What You See in the Dark is told from multiple points of view by the story’s different characters, switching between second and third person, which has jarring quality, yet also makes it feel richer and longer.  The use of second person, naming the reader as “you” made me feel implicated in the story, at times longing to turn away and deny what was a voyeuristic point of view, watching through the windows at the local drive-in or peering at the couple through the windows of the shop:

If you had been across the street, pretending to investigate the local summer roses outside Holliday’s Flower Shop, you could have seen them through the café’s plate glass, the two sitting in a booth by the window, eating lunch.