Reading today over at the excellent blog, Lotería Chicana, Cindy has written today about Oscar Zeta Acosta who would have turned 75 this year.  It’s a great post on a great blog and inspired me to put down my own thoughts about the Chicano wild child lawyer and writer that was Oscar Zeta. 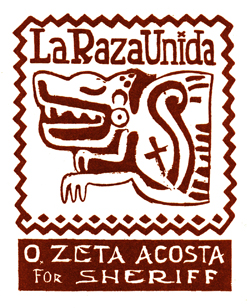 His biography is probably equal parts history and myth.  In the passionate and wild time that was the the Chicano movement in 1960s and 1970s Los Angeles, Acosta still stood out as larger than life.

I first encountered Zeta Acosta’s prose in Revolt of the Cockroach People.  I read it when I as eighteen, followed quickly by Autobiography of a Brown Buffalo. However much I may take issues with the sexism and narcissism of Acosta’s texts, I love these books and on some level, have compared every bit of Chicana/o writing I’ve read since to them. Though Acosta wasn’t originally from Los Angeles, these are Los Angeles texts about a moment in our history when everything was being questioned, when change was both seen as possible and being demanded.

It’s fitting, perhaps, that the birthdays of César Chávez and Zeta Acosta are so close — the men were born a decade and a week apart.  Chávez is seen as the saintly figure who fought self-lessly for decades to life and move his people forward, fighting for the rights of downtrodden farmworkers from the 1960s until his death, peacefully in his sleep, in 1993.  Acosta raged through life, a representation of raw Chicano manhood.  … Read the rest