Recently I’ve been researching a contemporary refiguring of Aztlán because of the “Aztlan conspiracy” being put about by paranoid nativists. 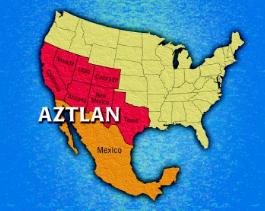 The Southern Poverty law center writes that the wide propagation of these false theories are led by two hate groups — the California Coalition for Immigration Reform and American Patrol.  Though them, Aztlán is being refigured as a racist conspiracy by Chicana/os against all other minority groups.  Yet this theory isn’t one held by a few fringe internet groups.  It is becoming more and more widely circulated — has even been reported by “mainstream”news papers and in the media in reports by CNN commentator Lou Dobbs.

These groups base their attacks on a misunderstanding / misreading of the “El Plan Espiritual de Aztlan,” the 1969 document adopted at the first Chicano Liberation Youth Conference. The document is a revolutionary one reflecting the spirit of the radical 1960s civil rights movements that the Chicano movement itself came out of.  The Plan de Aztlán has always been a unifying myth of the Southwest as being a Chicano/a space, for Chicano/as to lead and govern their own communities, not a call for governmental overthrow. Even at their most radical, most Chicano/a activists worked for social and cultural change on issues like racism, education and housing reform and the anti-war movement, not for political revolution.  Even radical Reies Tijerina (his group La Alianza — an alliance of Mexican American and Native American tribal peoples who led an armed courthouse raid in 1967) relied largely on the law and legal documents to pursue property rights.… Read the rest