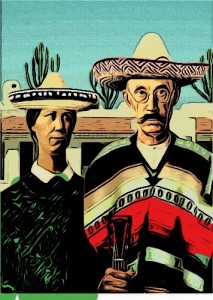 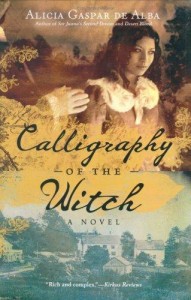 Actually I read this book yesterday. Was so into it I didn’t start the review until after it was completed. Like The Hummingbird’s Daughter, I’m reading it with the thought of including it in my Chicana Gothic syllabus.

Calligraphy of the Witch by Chicana scholar Alicia Gaspar de Alba is an amazing American novel. It confronts Chicana/o absence in traditional American history and literature by telling the story of a convent raised Mexican mestiza scribe, Concepción Benavídez, captured by pirates and brought to 17th century New England as a slave. Raped on her journey, the story is framed by Concepción’s daughter, born in the Boston colony and torn between her Mexican mother and her mother’s slave owner who adopts the child as her own.

Parts of the text are told as if written by Concepción in her scribe script (and are in a calligraphic font.) I loved this, but I did find my eyes straining to read at various points (maybe I need new glasses). Still, this touch makes the novel feel like a work of art.

Her Spanish language and foriegn ways put Concepción (renamed Thankful Seagraves) at odds with her New England owners and neighbors, eventually sweeping her up into the hysteria of the Salem witch trials. The story is well written and at times almost too tense. I could hardly put it down. And yes, it will be perfect for a course on the Chicana/o gothic.

ADDED: This wonderful YouTube trailer. You know you want to read it.… Read the rest