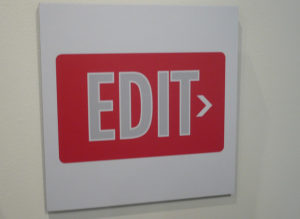 One of the things I didn’t know when I became an academic is that as one I would write something, it would be accepted, and then it would be months, or more often, years before the work was published. I also didn’t understand that submitting work for publication is a process, that it will be edited, come back to me, revised, sent back and that this process could repeat multiple times.

Being edited is hard for me. Like many academics, especially women of color, I carry with me a huge amount of impostor syndrome, generally believing I’ve gotten this far by somehow tricking a lot of very smart people into thinking I’m smart too. So when I get feedback on my writing, my first impulse is to believe this is the moment — I’ve finally been found out. That’s only my first reaction though. After I take a deep breath and read over editor comments I tend to think things like: “Wow, I’m so glad they caught this” or “They’re right, this could be clearer/longer/shorter, etc.” Good editing and good peer review is a gift from one scholar to another.

I’ve been fortunate in my editors and peer reviewers. With some, there’s been a feminist ethos of editorship that’s been focused on encouraging writing with constructive criticism delivered in a supportive manner. With others, it’s been an open peer review process where I’ve worked with the reviewer to revise something until we both agree it’s ready for publication. In all cases, the editors (including ones where my has been rejected) have been kind people who edit with generosity. I know that’s not always the case, that at times “rigor” and “honesty” are equated with cruelty and a seeming belief that we can be cutting so long as we’re speaking the truth. Yet editing someone’s writing is an intimate act. Writers put their ideas and skills with language in a reader’s hands, hoping the work is good enough to go through the gate the editors and reviewers keep. Writers sending their work to editors make themselves vulnerable to being told their work isn’t good enough to be included in their profession’s discourse.

Why am I thinking about this today? Partly because I’m at the University of Texas El Paso at the MALCS (Mujeres Activas en Letras y Cambio Social) Summer Institute. Editing and editorship have played a huge role in the organization — almost as soon as the Chicana and Latina feminists began meeting in the 1980s, they started working on getting each other’s work into print. As I wrote in “Practice and Praxis: Chicana Feminism and the History of the Chicana/Latina Studies Journal” for Diálogo, the history of the MALCS organization and its journal are intertwined.

But also this past month a book chapter, “’Tu riata es mi espada’: Elizabeth Sutherland’s Chicana Formation” I wrote on Elizabeth Martinez for the anthology Chicana Movidas: New Narratives of Activism and Feminism in the Movement Era (edited by Dionne Espinoza, María Eugenia Cotera, and Maylei Blackwell) was published with the University of Texas Press. Being included among the authors in this book is a great honor . I wrote the first draft of the book chapter in the summer of 2014 — its publication (including some incredibly useful peer editing) took a long time, but I think the quality of the collection shines. And then today, UndocuDreamers: Public Writing and the Digital Turn, an article I wrote last summer (so not that long ago – though it was part of a paper I gave at HASTAC in 2015) for a b2o special issue on the theme “The Digital Turn” was published. The editor, David Golumbia helped me shape and revise what had been a conference paper on a disturbing pedagogical failure into an article.

I don’t have a clever or even thoughtful end to this — except to circle back to where I started, that review and editing can be gifts.