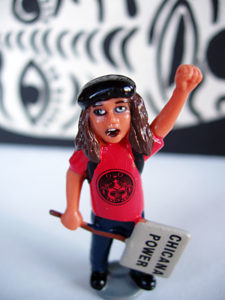 What we can do instead of gaslighting by telling adjuncts ‘it was ever thus.’

As those of you who’ve been reading along (all 5 of you) know, I received my Ph.D. from USC’s English department in spring 2011. This past fall 2017 I started a tenure track job in interdisciplinary studies at California State University Dominguez Hills, my dream job, teaching a student population I love in my home city of Los Angeles. Between 2011 and 2017 I was an adjunct at Los Angeles area colleges and universities.

Because I got a tenure track job, at a place where I’d been contingent faculty, a friend suggested I write a blog post or even CHE article on getting hired from part-time adjunct into a full-time tenure track position. I demurred, in part because I think contingent faculty who want to move to the tenure track are far too likely to blame themselves and feel like they’re failing. I don’t want to contribute to that by enumerating the things I did or tried to do to stay in the job market as if doing those things is a path to success. I have my job because I was lottery-level lucky.

Here’s a few of the ways I had a lot of luck. First, I finished my Ph.D. in English in Los Angeles. Los Angeles has a large number of colleges and universities that don’t have their own Ph.D. students. This means it’s not that hard to break into the adjunct pool and it’s possible to get enough work across universities to keep body and soul together. Many of the schools are unionized (or fear unionization) so pay on the higher end of national adjunct rates. Teaching a total of seven classes a semester at three to four different schools, I earned ~$40,000 a year from teaching. I was also fortunate (seriously, this was not planning on my part, just a desire to get paid over the summer) that rather than teaching a lot as a grad student I’d worked as a campus and freelance APA style editor. So I also had a reasonably steady stream of freelance and consulting clients.

Second, although my degree is in English, my specialization is in Chicana feminist writings. This field has a long history of theoretical and historical work being done by people in contingent positions or outside the academy. What this meant was not being in a full-time tenured position was never (as far as I can tell) held against me or used to minimize the importance of my research. I know that is not the experience of a number of adjuncting academics doing research and that experiencing such dismissal is soul destroying.

Third, I don’t have children, I have a partner with a steady job and health benefits, and we live in an apartment we rented when I was in grad school that’s under rent control. This meant that I rarely / never had to seriously worry about meeting basic expenses and that the money I earned from my freelance work could go to paying for me to attend conferences, including the annual MLA interview site. We aren’t place-bound so I was able to apply for jobs across the country. My only limitation was that I wasn’t willing to uproot us for a temporary position — if my partner was going to give up their job, it needed to be for something with more than one or two years of security.

Fourth, USC’s English department allows its graduates to participate in semester-long department job workshops where I got to work closely with faculty graduate advisors on putting together job materials and preparing for interviews. I was able to do this every year I was on the market.

Even with all of that though, I absolutely believe I would not have been hired had it not been for the radical way the department chair in Chicana/o studies at the first university where I was hired treated adjunct faculty. She saw the use of adjunct faculty by her university as exploitation and felt deeply responsible for her part in it — even though it was required of her as a chair to hire adjunct faculty. As part of my interview, she asked me what my career goals were. I told her I wanted a tenure track job, preferably teaching somewhere with a significant student of color population. She said that was good, because her goal was to get her adjunct faculty hired into tenure track positions. That I should see adjuncting as something I was doing on my way to being hired into a full-time job. She also told me the number of people who had worked for her department and where they were now working as faculty. She said by hiring me she was making a commitment to help me get hired into a full-time position.

What did her commitment to this mean in practice?

Basically, she treated me like I had a post-doc at the university (except for what I was paid, she couldn’t control that). That meant she came and observed my classes, discussed my teaching with me and wrote up recommendations for improvement. She made sure I had office space with a working computer, access to printing, and work-study student support. She offered to read my research and give me comments on articles I was working on. And, perhaps the most important act of all, she told me she was doing this so she could write a strong and knowledgable letter of recommendation.

And she did. Every year I was on the job market, she went over my job materials and my accomplishments from the previous year, and made suggestions for improvement. Every year, even when she was no longer chair and I was no longer working for that department, she got her letter updated and uploaded to Interfolio by the date she said she would. Every year. She did practice interviews with me and got someone she respected to do a mock online interview to test my set up. She sought me out at conferences and introduced me to her friends and told them about my work. Through it all, she talked with me about her research and asked for my advice, while also discussing my research and her thoughts on it. She never, by anything she said or did, made me feel like I was anything less than a colleague doing work that was significant for our shared field. She never acted like my not getting the (many) jobs I interviewed for, year after year, was in any way a personal failing.

She did all of these things without my having to ask — she consistently and repeatedly offered her help and guidance. When I welcomed it (who wouldn’t?), she offered more. She did likewise to the other people who adjuncted for her while she was chair. By the time I got hired, she knew me and my work better than any other senior scholar, including those who’d advised my dissertation.

I’m writing this because, reading on Twitter and elsewhere, I see how badly scholars with tenure feel about the job market and for the position of people adjuncting in their departments or at their colleges and universities. I offer this as something those of us with tenure or on the tenure track can do to help individuals trying to move into full-time employment, who may feel alone and ashamed they haven’t been hired into the sort of work they expected they’d do after graduate school. We don’t have to just wring our hands about how terrible the situation is, or (worse still) say the job market has always been terrible and those who are adjuncts should never have started a Ph.D. if they weren’t willing to be exploited. Reaching out and offering to help even one other person in concrete ways, taking responsibility to support and advise them, can make a huge difference. This remains true whether the person is hired into a full-time gig or ultimately decides to leave academia. This sort of mentoring values adjunct scholars and treats them with care and dignity.

This is work that matters.

Edit: To my surprise, this post has gone what Lee Skallerup Bessette termed “academic viral.” Several people have asked me who my mentor and former chair is – it’s Professor Karen Mary Davalos. She was my chair in Chicana/o Studies at Loyola Marymount University and is now at the University of Minnesota in their Chicano and Latino Studies department. Many thanks to everyone who has read and commented here and on Twitter.

26 thoughts on “A Radical Idea About Adjuncting: Written for Those with Tenure (or on the Tenure Track)”