In the book, Harry Potter and the Prisoner of Azkaban, we are introduced to dementors. What exactly are dementors? According to Professor Lupin they are, “among the foulest creatures that walk this earth. They infest the darkest, filthiest places, they glory in decay and despair, they drain peace, hope, and happiness out of the air around them” (P. 187). They are meant to represent fear, which is why they are the ones who guard the prison of Azkaban. It’s strange that Harry’s encounter with the Dementors wasn’t the same as everyone else’s. When Harry first encountered them on the Hogwarts Express, he had fainted, yet no one else had. This was a result of Harry’s past, the Dementors affect him this much because of the horrible things he has encountered. Harry mentions that he can hear his mother’s screams right before her death. That’s something nobody would want to even think about experience let alone have to relive it.

When Professor Lupin had the class practicing on the Boggart he got in the way of Harry’s turn because he had thought Harry’s greatest fear was Voldemort. His greatest fear ended up being the Dementors. Lupin observes this saying, “that suggests that what you fear most of all is – fear. Very wise, Harry” (p. 155). This is important because in the previous books Harry, Ron, and Hermione go through things like keeping Voldemort from the Sorcerer’s Stone and finding out who opened the Chamber of Secrets. These types of obstacles aren’t for the faint of heart (Ron is more of a scardy cat but he’s too loyal to leave Harry and Hermione alone).… Read the rest 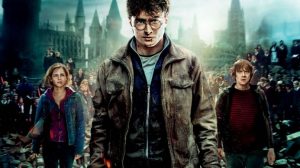 When I was younger, I always skipped reading the books of this series because the books looked very long. In the beginning of middle school people were always taking about the Harry Potter movies that have been coming out of the series, but I still hadn’t started an interest in them. My interest in the series didn’t start until I was in 8th grade, when I had watched Harry Potter and the Sorcerer’s Stone. I was immediately drawn in.

I didn’t continue watching the movies though, I started reading the books first because I have always liked reading the books before watching the movies. The books always tend to have more than the movies. I read through the series quick after that. It’s funny because I’ve never been into the fantasy genre. But this series really had me hooked, it had me wishing I had gotten a Hogwarts Acceptance letter when I was younger.

I loved how whenever you watched a movie or read a book it felt like you were experiencing it yourself. I remember getting excited when, I believe it was the ABC channel I’m not too sure, would have Harry Potter marathons. My family would sit around the TV and watch them until my mom would make us clean something because she didn’t want us in front of the TV for long. Now that I don’t live at home and my siblings are at different schools, this is like being at home and being surrounded by something familiar.