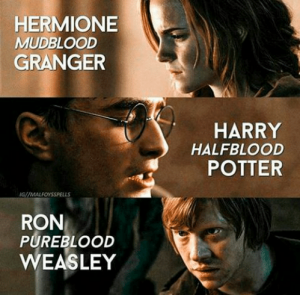 When we read the Harry Potter series as a kid, we think of nothing other than the adventure of a lifetime for kids who practice magic. A set of books that cater to the younger generation in the world of fantasy where magic exists along with unicorns, dragons, and centaurs. As we get older, we read the books again or even watch the films with a new set of eyes and realize that these books mean more than just having the ability to practice magic with your friends. J.K Rowling’s ability to include themes that reflect to today’s issues in a series of children books is deceptive but admirable. In Harry Potter and the Chamber of Secrets, we first read about the word Mudblood and what it entails. Those who are considered Mudbloods are Muggle-borns who practice magic, but do not come from a family of wizards. Half-bloods also carry the same definition, yet those who are Half-bloods have parents who are considered Pure-blood and Muggle born wizards. Those who calls themselves Pure-bloods are wizards and witches who come from a family tree full of wizards. Lastly, people who are known to be Muggles are people born into the world with no association to the magic world. These are the terms J.K Rowling introduced in the Harry Potter series that add to the dominant theme of discrimination against Mudbloods, Half-bloods, and Muggles. Whats prominent is how the series reflect to today’s society in how we discriminate groups of people.

We first begin to see how these terms are used to discriminate against wizards in “Harry Potter and the Chamber of Secrets”. Mudblood is considered as a derogatory term, those who are Pure-bloods feel that Mudbloods are of a lower breeding who are not worthy of magic. Draco Malfoy in “Chamber of Secrets” says to Hermoine, “No one asked your opinion, you filthy Mudblood.” Hermione is a muggle-born witch, her parents work as dentists in the muggle world. Draco immediately feels superior to Hermoine because his blood is pure and hers is not. He sees her as someone beneath him which is why he treats her so poorly. Harry Potter is another wizard who is considered to be a Half-blood. In “Chamber of Secrets” Draco says to Harry, “He’s another one with no proper wizard feeling, or he wouldn’t go around with that jumped-up Granger Mudblood.” Here we see Draco insulting Harry for being a Half-blood with no proper wizard feeling, but his poor choice of being friends with a Mudblood. Because Harry is not as pure as him, he doesn’t believe it to be shocking for him to be around Hermoine. Draco would feel that its best that people like Harry and Hermoine to not hang around him. These are prime examples of how wizards are discriminated based on the purity of their bloods. Draco resorts to this type of behavior because he has parents have the same mentality. His father Lucius is a Death Eater, those who are apart of Voldemorts army do not believe Mudbloods should have the right to participate in their world. If a Pure-blood is seen around with these groups of people, they are immediately casted as “blood-traitors”. An example of this would be the Weasly family. Here we have a family of Pure-bloods who reject these type of prejudices, but are also being casted and treated differently because they choose to no discriminate. This type of treatment against wizards is not a new thing. Pure-bloods truly feel superior from other groups of people and therefore should be treated with the upmost respect because of it. J.K Rowling touched upon the discrimination of a group of people that is relatable to whats going in today in the real world.

In today’s society, many groups of people face similar treatment like Hermoine and Harry. In my case, I am a Mexican-American with parents who are considered “illegal aliens”. Growing up, I was treated differently because I was not white. I do not have the same privileges as to those who are of a whiter complexion because apparently I have a President that believes my people are murders and drug addicts. Several groups of people here in America are treated differently because of the color of our skin. Which is why the Harry Potter series touched upon a subject that is so relevant to what is going today. It’s important for kids to read and understand the parallels of the wizarding world to the world they live and realize that yes they are people who are good and bad but not all. I believe what J.K Rowling did with these series is so important to the younger generation. These books present themes that are easily understood and some that are not, but is a learning experience worth noting.