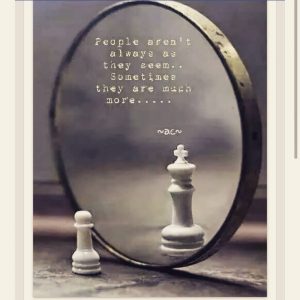 In the Wizarding World of Harry Potter there are a lot of magical life lessons were we learn throughout each book/film one being, Never judge a book by it’s cover. J.K Rowling uses Harry Potter’s perception of how he sees individuals and judges them by any type of actions/activities nobel or suspicious. The books are perceived through Harry’s eyes. Is Harry’s view of others always accurate?

In the first book, Harry Potter and the Sorcerer’s Stone, Harry learns a lot about what he thought he knew of others. Could he have been wrong or right? Harry kept his eye on Professor Snape and thought he could not be trusted. Harry’s finger would always point out to Professor Snape for any type of suspicious occurrence, such as the release of the Trolls in the castle that nearly took Herminoes life away. Especially in the beginning when Harry sees Hagrid take something from the vault at Gringotts, and how Hagrid wanted to protect it. He thought that Professor Snape was the one who was after the stone. Or when Harry quickly assumed that Snape was the one who enchanted Harry’s broom during the Quidditch game. What really determined Harry in believing that his judgments towards Snape were true was when Snape stopped Professor Quirrell:

“Oh, I thought we’d keep this private,”said Snape his voice icy. “Students aren’t supposed to know about the Sorcerer’s Stone, afterall.”….”Have you found out how to get past that beast of Hagrid’s yet?” “You don’t want me as your enemy, Quierrel” Said Snape taking a step toward him.

Harry concluded that Snape was up to no good and wanted the Sorcerer’s Stone to himself while keeping Professor Quirrell quite. Snape wasn’t helping his case when the incident of Harry’s first Quidditch game. Harry, Ron and Hermione saw how suspicious Professor Snape looked by standing up and murmuring some sort of “enchantment” to “enchant” Harry’s broomstick. That’s when Harry’s friends took action and set Snapes cape on fire to stop him from enchanting Harry’s broom. Ron and Hermione were convinced that Snape is after Harry. But why?

Which brings us to Professor Quirrell. No one really suspected poor ol’ stuttering Professor. At first he looked as if he was a well mannered and reliable faculty member, especially knowing he was placed as a professor at Hogwarts. It had turned out that Professor Quirell hid a very dark and dangerous source kept under wraps of his head. Harry discovered that Professor Quirell was indeed a Horcruex and a follower of He who shall not be named. Harry’s discovery quickly brought all the assumptions he had of Professor Snape to zero: 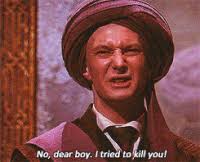 “But Snape tried to kill me!” “No, no, no I tried to kill you … Another few seconds and I’d have gotten you off that broom. I’d have managed it before then if Snape hadn’t been muttering a countercurse trying to save you.”….“Snape tried to save me?”  [CH. 17 pg 288-289] Harry’s realization of Snape not being the “bad guy” had led him to not suspect him over any future incidents that occur at Hogwarts or any attacks being led to him. Little did Harry know that despite doubting Professor Snape for seven years attending Hogwarts, Snape’s motives or intentions had always meant to fight and protect him for the love he had always carried toward Harry’s mother, Lily.

An Honorable mention, In Harry Potter and the Goblet of Fire, Professor Gilderoy Lockhart is another great example on how people are not what they seem. Lockhart portrayed himself as a heroic figure and wrote books about his encounterments on dark creatures. He would use a Memory Charm to force people whom shared these stories/adventures and have them forget they ever did. Gilderoy will claim credibility and ownership of those stories to make himself famous. Thankfully, Ron’s  broken wand, ironically lost Gilderoy’s own memory due to a backfire on his memory charm while using Ron’s broken wand. Harry and as well as many of us need to see and be more aware that not many people aren’t always what they seem. We must be careful with Professors such as Quirrell or Gilderoy Lockhart. Through Harry’s adventures and encounterments we see and learn that Harry’s experiences should be seen with a much more open mind towards others, because you may never know who you may be attacking the one who is fighting with you versus the ones who are fighting against you.