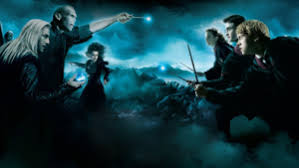 Harry Learns about Good vs. Evil

Harry Potter brings to attention many different themes within the series. One theme that stands out is the idea of good vs. evil and how Harry learns there is more than just those two sides. When he was eleven years old in the Harry Potter and Sorcerer’s Stone, his manner of thinking was very concrete, that there was only a good side and evil side, however, once he grows older, and after all the obstacles he has been through, Harry starts to learn that there is more to just good and evil, that there are grey areas in between.

In Harry Potter and the Sorcerer’s Stone, Harry starts to learn about the magical world, and has his first lesson about good and evil with the Hogwarts houses. Right away, he learns that Gryffindor is good and Slytherin is bad. In this passage, Harry has asked Hagrid what the houses are, Hagrid says, “Better Hufflepuff than Slytherin,” said Hagrid darkly. “There’s not a witch or wizard who went bad who wasn’t in Slytherin. You-Know-Who was one,” (Rowling 80). Hagrid’s answer to Harry is a good example to good and evil being only two sides, a lesson Harry believes at this age. In this moment Harry learns that Slytherin is bad, that every student who is in Slytherin turns out evil, and that it would be better to be in Hufflepuff or anything better than to be in Slytherin. For even Ron says, “I don’t suppose Ravenclaw would be too bad, but imagine if they put me in Slytherin,” (Rowling 106). In Harry potter and the Sorcerer’s Stone, there is a lot of talk about the houses and which one is the best one. There is already a lot of pressure for Harry to be in the right one, and quickly he learns Slytherin is the worst because it is dubbed as evil. Even Ron can not imagine himself in Slytherin and so this contributes a lot to a young eleven-year-old Harry seeing good and evil as just two sides.

As Harry grows older, the line between good and evil begins to blur, he starts to learn that there are more than just two sides, that there are grey areas in between. He learns that some people must make choices between what they think is right and what is wrong. He learns that some people are not entirely good or entirely evil. An example of this would be in Harry Potter and the Order of the Phoenix. Harry sees a memory of James Potter and Sirius Black picking on Severus Snape in the pensive. He is so sick of what he has seen, he goes to visit Sirius through floo to get some questions answered, because he just found out that his dad wasn’t entirely good and noble as some people have told him, but bad as well.  In this passage in Harry Potter and the Order of the Phoenix, Harry gets his answers, for Lupin says, “I wouldn’t like you to judge your father on what you saw there, Harry. He was only fifteen-.” (Rowling 670). I feel as if Lupin knows what Harry is thinking and why Harry is taking this so hard. In this scene, he is learning that his father wasn’t entirely good, but also bad when it came to treating Snape. Sirius also tells Harry the same thing, that James Potter was an idiot at age 15 and he grew out of it, that he was still a good person. Harry says that he was 15, now questioning his father and his self. This also connects to when Harry saw Arthur Weasley getting attacked by the snake and Harry blames himself thinking he is bad, and questions wherever he is good or evil or in between, a concept that is new to him and continues to learn through the whole series.